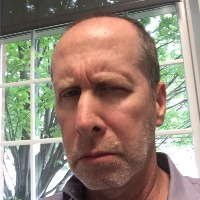 Jeff Calvin wrote for Blues Revue and Pop Culture Press magazines from 1999 to 2003. He was a gigging musician for 40 years in America, retiring in 2018. The first record he bought was 'Penny Lane'/'Strawberry Fields Forever', in July of 1967, a schoolboy of 8. Three older siblings kindly provided the rest of the catalog, from 'Please Please Me' on Parlophone, to Sgt. Pepper (the last 3 records were, oddly, ignored. We jumped right to McCartney.) Glued to Top 40 radio from that point, he noticed a distinct drop-off in quality as the '70s progressed. A chance late-night radio encounter with ELO's rollicking cover of 'Roll Over Beethoven' demanded further investigation. He turned to "progressive rock radio", which quite a thing let me tell you, before it was suffocated in its crib. Where was I? Ah.

Soon it was off to college, one chosen because it had  a radio station. No one thought to tell him it was primarily a Police Science school, filled with seething short-haired reactionary types who longed to punch hippies. Hilarity ensued. Four years later he graduated with a two-year degree. "Not bad!", he thought. He spent the next 15 years as in radio, working up from the midnight-to-six DJ shift, to drive-time shows and eventually, management. But none of the music was progressive, nor was it rock – that format was long gone (see paragraph one.) Mostly, it was just bad.

Enough of that. There followed a two-year adventure as a full-time musician; having practiced guitar since teendom,, he was now deft enough to muddle about with the Blues. The East Coast of the US really need another Stevie Ray Vaughan mimic, and he filled the bill.

Jeff moved to San Francisco in 1994 and met Ed Ivey, bassist-for-hire and, as it turned out, a writer for Blues Revue magazine. Having apparently impressed Ed with his sparkling repartee, Jeff was called on one night to bail out the double-booked Ivey by attending and reviewing a John Lee Hooker show at the Fillmore. Thus began his short-lived, but entirely delightful, writing career.  An offer came to write for Austin, TX music mag Pop Culture Press, which was accepted, though the relationship was short-lived.

After several years of album reviewing, Jeff wrote a number of feature stories for Blues Revue, But with a day job, night gigs, and a family, time became an issue, and, sadly, it was either continue playing music or just write about it. An easy decision, then.

Retired from just about everything, Jeff lives outside Washington, D.C. with his labrador, Chester, named after Mr. Burnett.  He is currently researching the career of Percy Mayfield for a possible magazine article.

YES, WE HAVE been Experienced. We've been to Electric Ladyland. We've seen the Purple Haze, been Fired and Foxey Ladied into submission. Jimi is everywhere ...

THE LONG-DISTANCE call came on a spring day in 1965, from Chicago to the Lone Star State – from blues present to blues past. Leonard ...

WHILE THIS IS a most welcome reissue for several reasons, it probably would have been good to note somewhere on the package that this is ...

Joe Louis Walker Is A Regular

Profile and Interview by Jeff Calvin, Blues Revue, May 2003