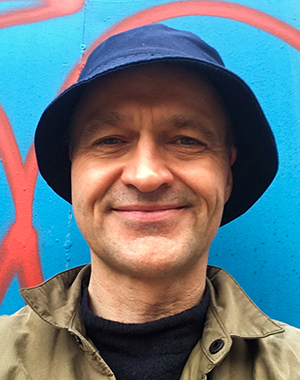 James Maycock attended the University Of East Anglia, reading History Of Art & Film Studies, before entering the wicked world of the media. As a freelance print journalist, he's written numerous feature articles for all the British broadsheets: The Independent, The Guardian, The Telegraph, The Times, The Financial Times – and also for high-profile magazines: MOJO, the Guardian Weekend Magazine, the Observer Music Monthly. He's also worked for record labels and produced programmes for BBC Radio 1, 2 & 3.

In television – where James now concentrates his energies – he's worked for a number of broadcasters, including BBC TV, PBS, Channel 4 & Sky Arts, since 2003. In the last few years, he has directed & produced a number of highly acclaimed 60-minute BBC Television, History Channel & Sky Arts documentaries:

This film explores the rollercoaster ride of Detroit, its transportation & cultural revolutions. It reveals the city as a place of dreams, broken dreams, but also of dreams for the future. This is viewed through the prism of the once glorious Michigan Central Station.

ROCK AND ROLL: WORSHIP (SKY ARTS: 2017) Part of a highly original 10-part series,this film goes in search of wildly different aspects of devotion & transcendence in music – from the spiritual cowboys of 1960's L.A. to New Orleans voodoo, from festival freak-outs to sanctified hip-hop.

ROCK AND ROLL: EXCESS (SKY ARTS: 2017)Part of a highly original 10-part series, this film heads out in search of the desire for decadence, breaking the rules, challenging conventions, pushing things to the limit – these are the primal constituents of rock. It was never just about musical notes.

TOM WAITS: TALES FROM A CRACKED JUKEBOX (BBC TV: 2017) A film about one of the most fascinating musicians of the last 4 decades – a bewitching afterhours trip through the surreal, moonlit world of a man who's created a unique, alternative American soundtrack all of his own.

YEHUDI MENUHIN: WHO'S YEHUDI? (BBC TV: 2016) Made for the 100th anniversary of Menuhin's birth, this film explores the 20th century's greatest violinist's amazing journey through life: from 1920's global fame as a child prodigy to his turbulent WW2 years & work as a political agitator.

MASTERS OF THE GUITAR (SKY ARTS: 2015) A film made especially for Sky Arts' major re-launch. 10 great players – from Black Sabbath's Tony Iommi to Roxy Music's Phil Manzanera, Thurston Moore to Wilko Johnson and Richard Hawley – reveal the guitarist that most inspired them.

NORTHERN SOUL: LIVING FOR THE WEEKEND (BBC TV: 2014) A much acclaimed film about the underground, working class club culture that exploded across the north of England in the 1970's.

DANNY BOY: THE BALLAD THAT BEWITCHED THE WORLD (BBC TV: 2013) An award-nominated film which investigated the emotional life & vast cultural influence of this famous ballad – from World War One to Elvis, from Johnny Cash to 9/11.

BOBBY WOMACK: ACROSS 110TH STREET (BBC TV: 2013) A film following this musician's rollercoaster trip through life, from the 1950's gospel highway to his glorious Indian summer sparked by a Damon Albarn-produced album.

GERSHWIN'S SUMMERTIME (BBC TV: 2011) A film that reveals the secret, magical life of George Gershwin's 1935 classic tune up to the present day.

THE MOTOWN INVASION (BBC TV: 2009) An award-winning film which focused on the Motown Revue's very first, almost disastrous, 1965 UK tour as it zigzagged around the provinces.

Drop The Dread, Honky: Why White Artists Wanna Be Black

IN 1959, JOHN Howard Griffin, a white journalist, dyed his skin black and travelled through the southern states of America. He found the experience ...

"WOW, YOU guys are really getting it on!" exclaimed Chuck Berry, observing the Rolling Stones cut 'Down The Road Apiece', a track he'd recorded himself ...

CREED TAYLOR was extremely shrewd at marketing jazz to those who were nervous of the genre, particularly after the discordant shreaks & squeaks made by ...

JUST OVER 50 YEARS AGO, brothers Phil and Leonard Chess, two industrious Polish immigrants in Chicago, tentatively established what would become the most famous blues ...

Frank Sinatra: Nelson Algren's The Man With The Golden Arm

Retrospective by James Maycock, Guardian, The, 1998

How Nelson Algren's acclaimed novel was made into Hollywood's first film about heroin. ...

Hip-Hop: Puppets On A String?

How & Why Black Rappers Exploit Racial Stereotypes (With references to historical precedents through 20th century) ...

Bob Marley & the Wailers: Celebrating Bob Marley at Studio One

On the 35th anniversary of Studio One ...

Profile and Interview by James Maycock, Independent, The, February 1998

"YOU GET THE RIGHT GUYS to play the right things at the right time and you got a motherfucker!" recalled Miles Davis in his inimitable ...

Retrospective by James Maycock, Independent, The, May 1998

"WHAT’S YOUR favourite type of high?" inquires Bruce Weber towards the end of his film Let’s Get Lost. Chet Baker’s answer is unsettling. ...

WITH THE passing of time, a tragic event sometimes reveals a comic nuance. One night in 1964, the Skatalites were performing at Club Calypso in ...

Young Turk Who Got The Blues: Ahmet Ertegun & The 50th Anniversary Of Atlantic

Profile and Interview by James Maycock, Independent, The, July 1998

IN HUNDREDS of photographs, Ahmet Ertegun appears anonymously beside the famous. The celebrity might be a gaunt Phil Spector, Mick Jagger grinning widely or a ...

Metro & The Birth Of The British Sound System

Profile and Interview by James Maycock, Independent, The, August 1998

"AMPLIFICATION AND records – if you have those 2 items, then you can go somewhere," states the man called Metro. Born with the slightly less ...

MILES DAVIS CONFESSED twice in his candid autobiography he fancied Billie Holiday. "She had such a sensuous mouth," he remarked, "I thought she was not ...

Retrospective and Interview by James Maycock, Independent, The, March 1999

THE COMPETITIVE MUSICAL CLIMATE was so intense in mid-'70s Kingston, that Jamaica's capital city was given the soubriquet "Third World Nashville". Hundreds of aspiring ...

King Tubby: "This is a journey into sound"

IN JULY 1972, at the end of another chaotic, decadent but also highly profitable Rolling Stones tour, a sumptuous party was thrown on the roof ...

IN PARIS, A COUPLE of weeks before his death on 15th March, 1959, Lester Young spoke about his friend, Billie Holiday. "She’s still my ...

In the Sixties, Nina Simone's music radically espoused black civil rights. But by the turn of the decade she had rejected politics. Why? ...

How The 2000 Movie Capitalized On The Original's Reputation ...

Retrospective and Interview by James Maycock, Independent, The, January 2000

BEFORE JIMMY SMITH revolutionized the archaic Hammond organ, the lethargic sound this bulky, brown instrument emitted was frequently described, like an ailing patient, as "wheezing." ...

IN THE CRAZY, HEADY DAYS of the Black Power era, Nikki Giovanni was one of the few female voices to offset the rampant machismo of ...

Profile and Interview by James Maycock, Independent, The, 2 February 2001

Ice-T: Iceberg Slim: The Best-Selling Pimp Remembered By His Widow

Tales From The Funky Side Of Town: “Soul” and “Funk”, Then and Now

"YOU'D BE SURPRISED how time can change the meaning of a word," rasped black comedian, Redd Foxx, during a performance at Harlem's Apollo Theatre in ...

THE TALE OF the Incredible Bongo Band is, aptly, an improbable one. With a highly eclectic cast that includes Bobby Kennedy’s assassin, Sirhan Sirhan, ...

War Within War: Black Americans And The Vietnam Conflict

The Vietnam war saw countless numbers of America's young men – both black and white – thrown into combat. They were there to fight the ...

After reports in this magazine (Mojo issue 88) of eccentric antics preceding a New Year's Eve concert in Las Vegas, will James Brown behave himself ...

"WITH THE GUITAR outselling all other musical instruments today," declared a Down Beat editor confidently in 1967, "it's good to have Mel Brown around to ...

ROBERT SABBAG'S Smokescreen, subtitled "A True Adventure," reads like a Boy's Own escapade. Its swashbuckling protagonist, Allen Long, blessed with a princely face and an ...

Retrospective and Interview by James Maycock, Guardian, The, 20 July 2002

Intro: This is about 1000 words longer than the version published by The Guardian. There’s much more on the concert, more quotations and more on ...

The Ohio Players, Sly & The Family Stone: In Pursuit Of The Pimp Mobile

A look at how black pimp culture has crossed into black popular culture, for which I interviewed Antonio Fargas. I refer to Miles Davis, the ...

Louis Prima: An Entertainer In His Prime: The Great Louis Prima

2003 note: I interviewed his saxophonist and arranger, Sam Butera, for an article that was published in the month of what would have seen Louis ...

James Brown: The Making Of James Brown Live At The Apollo

"ARE YOU READY for Star Time?" exclaimed MC Lucas "Fats" Gonder from the stage of Harlem’s Apollo on 24th October, 1962. The eager crowd ...

ON 20TH AUGUST, 1972, Isaac Hayes was celebrating his 30th birthday. But Ike wasn't chilling at his gilded Memphis mansion ripping into a skyscraper pile ...

Gil Scott-Heron and Brian Jackson: Where Have All The Good Times Gone?

IN THE LATE afternoon of 4th April, 1968, Martin Luther King was shot through the neck on the balcony of Memphis' Lorraine Motel. Pronounced dead ...

ON 19TH JULY, 1972, the first few images flickering on the screen at the premiere of Our Latin Thing in New York’s Line 2 cinema ...

A ROMANTIC STREET punk, a jailbird with spirit, a champion of the blue-collar underdog – Joe Bataan is a rebel with soul. ...

DAMN! LIFE WAS sweet and dandy for the Godfather of Soul in the last few years. But James Brown's slippin' and slidin' once again – ...

Profile and Interview by James Maycock, Times, The, June 2004

IT WAS IN THE summer of ‘64, 40 years ago this month, that Joao Gilberto’s ‘A Girl From Ipanema’ was released. A huge global ...

"I'M ADDICTED to creating," mutters a grizzled, slightly stoned Gil Scott-Heron. "I use other things from time to time." It's late afternoon on Friday 3rd ...

1974 WAS A fine year for Jerry Masucci's golden boys. Following the triumphs of Our Latin Thing, the Fania All Stars broke out across the ...

JAMES BROWN was one of the most extraordinary Afro-Americans of the 2nd half of the 20th century. A raw, emotional singer, electric performer and tough ...

Obituary by James Maycock, Independent, The, May 2011

GIL SCOTT-HERON lived a life of two distinct, very different halves – as dissimilar as night and day. Up to his mid-30s, Scott-Heron was a ...

IT'S EVERYWHERE. It's become part of the air we breathe. 'Summertime' certainly feels like it's been with us forever. One day this June, while making ...

In some versions it's a tender lullaby, in others a siren song. Filmmaker James Maycock explores the bittersweet mysteries and colourful past of Gershwin's most ...

'Danny Boy', the song of loss and exile that became one of humanity's great anthems, is explored in a BBC Four television documentary, Danny Boy: ...