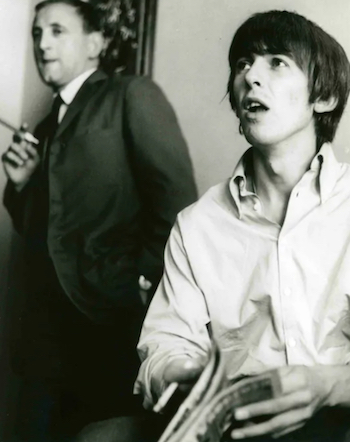 Ivor Davis (pictured with George Harrison in 1964) has written widely on movies, murder and medicine for the London Daily Express, The Times of London, the New York Times Syndicate, and Los Angeles Magazine for over four decades. His previous books include Divided They Stand, and Five to Die: The Book That Helped Convict Manson plus the widely acclaimed The Beatles and Me on Tour, his personal account of the 1964 Beatles’ North American tour. He was the only daily news reporter to accompany the Beatles from start to finish. His new book, Ladies and Gentlemen… The Penguins is a delightful children’s book about musical penguins whose story bears a striking resemblance to that of the Beatles.

The Beatles: 3,000 gatecrash the Beatles

Pills (not THE Pill but Pills for the Mind): Hollywood Grasps a Hot Theme

ONCE HOLLYWOOD shunned controversial subjects for its pictures. Now it has became even bolder than some of the European film-makers. ...

'COME FILM WITH ME' ROW From IVOR DAVIS, HOLLYWOOD, Thursday ...

HIS WELL-OILED black hair is combed into the perennial duck's tail, his sideburns are long, but vintage '50s rather than '68 style, his nasal sounds, ...

PHOTONEWS with the full version of John Lennon's blues... and his song of love ...