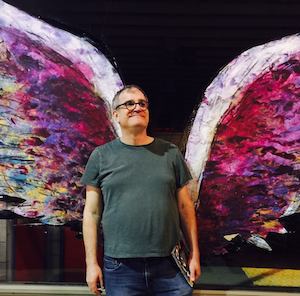 Dave Schulps’s 30-plus-year career as a music journalist of sorts probably can be said to have begun under a laboratory hood (i.e. a large vent for eliminating noxious fumes) at a science high school in the Bronx, which he and lab partner Ira Robbins hid behind in order to read Melody Maker during lectures. Although he didn’t write (actually, co-write) his first piece, a review of Lou Reed’s solo debut, until a couple of years later, the spark was ignited then, and fortunately did not blow up the lab.

In 1973 – the week of the US release of Mott the Hoople’s epic Mott album, to be exact – he and Robbins visited the home of a local record fanatic where they were introduced to former college paper music editor Karen Rose. For some reason, the three, inspired by the two music 'zines they’d seen at that point, Alan Betrock's amazing Rock Marketplace and Greg Shaw's groovy Who Put the Bomp, decided to start one themselves. Dubbed Trans-Oceanic Trouser Press at first – and later cleverly shortened (along with the cuffs) to Trouser Press – the expected first-and-only issue somehow managed to sell out, leading to a decade more of same. Well, sort of. The original hand-stapled, 24-page mimeographed (look it up, youngsters) sheets sold in front of concerts gave way to ever-increasingly more professional production and distribution.

For Schulps, though, things weren’t quite the same at TP after the cataclysm that was 1977 (though, in truth, he continued listening to Elvis, the Beatles and the Rolling Stones alongside the Clash, Ramones and Pistols) and some time in ’79 he left his managing editor’s post and huge salary behind to (gasp!) manage a rock band.

Two years later, after finding out what he was not put on this earth to do – and acquiring a taste for Hank Williams, George Jones and Lefty Frizzell during a painful year’s unemployment – he returned to writing with the music trade Cashbox, only to skip out when a nascent radio syndicator made him an offer he couldn’t refuse (the offer being, it’s not Cashbox). 23 years later and thousands of uncredited interviews later, he’s still there and so, amazingly, is Robbins, who came aboard some years ago.

Those interested in checking out Schulps’ very occasional output outside Trouser Press can consult the morgues of Circus, Gig, Crawdaddy!, Hit Parader, Sounds, Musician, Guitar World, Walrus, BAM, Grindstone, Uncut and The Big Takeover...if you can find them!

1. POMP: COULD the band who sing "We're the Worst Band in The World" possibly be pompous? ...

The Who: What's Next For The Who

"The report of my death is greatly exaggerated"– Mark Twain ...

After dealing with his current stage persona Vambo – and virtually demanding the invention of punk rock – the Scottish veteran takes us back to the roots of British rock'n'roll: the showbands; Tony Sheridan; the Hamburg clubs; the rip-offs, right up to the formation of his Sensational Alex Harvey Band...

LET'S START AT the beginning. Your first band was the Fontana Showband. What exactly is a showband? ...

Jackie DeShannon, The Everly Brothers, The Kinks, Jimmy Page, The Who: Jimmy Page Gives The Interview Of His Life

BACK IN TP 16 Myron Bretholz wrote a lengthy run-down of the life and times of Kevin Ayers, English eccentric, banana artiste and wine connoisseur ...

WHO IS THIS little fella striking a defiant Presleyesque pose on the cover of My Aim Is True? Why, it's Elvis, of course. Not the ...

JIMMY PAGE gives his version Part 2 of a three-part interview by Dave Schulps ...

JIMMY P. on LED Z. The Conclusion of a three-part interview ...

The Vibrators: The New Yorker, Toronto

Elvis Costello: I fought the law!

RARELY HAS MYSTERY surrounded the arrival of a new rock performer the way it has Elvis Costello. Totally unknown a year ago, courtesy of Stiff ...

SO YOU THINK Stiff are the only one allowed to go slightly batty with their advertising, eh? Well guess again. These Motors boys got 'em ...

ITEM: Officers of the Memphis, Tennessee Vice Squad attended the Sex Pistols' American debut performance in Atlanta on Thursday just to make certain that the ...

BESERKLEY RECORDS certainly keep things interesting. Slightly over a year ago they became the first American New Wave independent to secure a distribution deal with ...

The Who: Pete Townshend

"SHADDUP," YELLS Pete Townshend. Then he slaps his leg and Towser the dog comes running over. "Do you want to go out?" Pete asks, getting ...

IT HAS BEEN over a year since Television's debut album, Marquee Moon, and for the band's American fans most of that time has been a ...

TELEVISION USE the energy and the imagery of the Big Apple, cross-pollinating them with a musical vision akin to what was coming out of the ...

THE ABILITY TO walk into a room and make someone you've never met feel like they've known you for years is called 'charm.' The ability ...

"If left is right and right is wrong, you'd better decide which side you're on."– Tom Robinson ...

WINTER 1974: When I saw the cover of the first Kiss album, I laughed. I mean, here were these four geeks looking like rejects from ...

The Jam: All Mod Cons

IT HAS TAKEN the Jam merely three albums to go from a young band with a lot of energy and a love for mod-era rock'n'roll ...

XTC'S FIRST ALBUM, White Music, released earlier this year, was a stunning debut from a band that defies easy labeling. ...

Probing reporter Dave Schulps sees the show, talks to the Records' Will Birch, and delves into the acidic past of Wreckless Eric. ...

The Jam: Mods For Moderns

Profile and Interview by Dave Schulps, Trouser Press, May 1979

HAS IT really been three years since the Jam made its first live appearance in America? Since three teenagers in matching suits and skinny ties ...

THERE IS NO joy in Joy Division. And no division either. At the University of London the band presented an hour of unrelenting, uncompromising bleakness; ...

IN A BUSINESS geared more and more towards pushing product, Kevin Ayers is a rare commodity. He's never sold great amounts of records, but has ...

THE MUSICAL trend of the year in Britain, a nation which obviously relishes its fads, was the emergence of the neo-ska bands. Buoyed by a ...

DO I DETECT the beginnings of a love affair between New York and the Buzzcocks? The Mancunians packed the Ritz solid on a Sunday night, ...

PERHAPS THE most fertile period for pop-rock experimentation were the years between the end of the Merseyboom and the beginning of the Woodstock/FM radio era. ...

IF, AS GRAHAM PARKER declared on Squeezing Out Sparks, "passion is no ordinary word," then Another Grey Area should by all rights have been no ...

The Smithereens Get Non-Technical

LEARNING TO DO MORE WITH LESS, INCLUDING — GASP — REAL INSTRUMENTS AND REAL SONGS ...

This brief interview with Joe Henry was conducted on the "red carpet" arrival line at the ASCAP pop music awards in May. Henry received an ...

MICK JAGGER may have insisted once upon a time that "it’s the singer not the song," but that doesn’t necessarily mean that even the greatest ...