Kit Aiken is a pseudonym for Chris Ingham 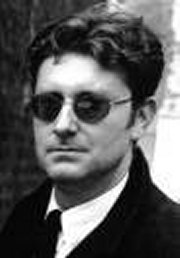 Born '62 in the North East of England (cine film exists of him wielding a Beatletar in a North Shields garden in late '64), did a decent Noddy Holder until his voice broke, became a jazz head in his teens which both suited and fuelled his innate isolationist tendencies and mistaken superiority complex, dabbled with Drama and English at Warwick University 1981-85, played in distressingly quirky art 'n' b band The Locomotives 1983-87, married his sixth-form sweetheart in '88, was half of arch miserablist duo Because 1990-91 (with Jim Irvin, of this parish), was quarter of the unbearably hip Flanagan Ingham Quartet 1994-2001, wrote for MOJO and UNCUT until there was nothing left to say, authored Rough Guides to The Beatles (2003) and Frank Sinatra (2005), is currently able to feed his family thus:

WHEN I WAS 15 – AND FIVE YEARS AN EX-PAT GEORDIE – MY contemporaries idolised Strummer and Weller. I wanted to be like Alan Hull. ...

ON FINISHING Kitty Kelley's depressing, unrelentingly seamy His Way, you were so stuffed full of (alleged) details concerning the less admirable aspects of Sinatra's remarkable ...

The Carpenters: Interview with Richard Carpenter

CLAIRE MARTIN may well be the best British jazz singer for a generation, but she drives like a maniac. "Nervous?" she cackles, slamming into third, ...

THEY QUIT TOURING IN '74; broke up in '80. Now the arch hipster auteurs of literate, cynical, smart-ass rock jazz – the creators of some ...

"WHAT DO YOU THINK OF ALL THAT?" ENQUIRES PAUL McCartney after half a dozen silly-voice choruses of ‘Why Don’t We Do It In The Road’. ...

IT COULD HAVE gone so wrong. A trio of thirtysomething musos with jazz/hip-hop tendencies and chops to spare, take to jamming in Hammersmith and decide ...

Ben Folds Five: Whatever and Ever Amen (Sony)

Piano/bass/drums trio whose 'Underground' was a summer Top 40 hit. This is their second album, their first for Sony. They are, wouldn’t you know, big ...

All the single hits (1970-1986) and ‘Une Nuit A Paris’ from Manchester's art-pop maestros, famously named after the average volume of the male ejaculation. Plus ...

NOTE: Commissioned by Nick Coleman at The Independent, this interview remained unpublished due to Branford and Ellis canceling their live appearances. ...

Review and Interview by Chris Ingham, MOJO, May 1997

ONCE, WHILE LISTENING To Prefab Sprout's Protest Songs, wide-eyed in admiration at the musical facility, the poetic imagination, the sheer individuality of it all, my ...

According to the man himself, Paul can bash out a song in the time it takes Linda to whip up a soyasome supper. But is ...

IF YOU LOVE The Beach Boys and other purveyors of the pocket symphony as much as the highest Llama Sean O'Hagan obviously does, then Hawaii ...

Why all-acoustic this time? ...

EVEN ALLOWING for our response to singing being largely subjective, some voices just do the job, don't they? For me, Eddi Reader is up there ...

SO EFFICIENT, SO all-pervasive has been Canadian pianist-singer Diana Krall's rise in the jazz world (and beyond, in sales terms), an American jazz magazine offered ...

BECAUSE OF THE near-flawless nature of a handful of albums (Wee Small Hours, Songs For Swingin' Lovers, A Swingin' Affair, Only The Lonely), it would ...

NEWMAN FANS have been baying for this kind of set for a while, especially as the songwriter's back catalogue has been unavailable on CD for ...

XTC: 'Til Death Do Us Part

Like the set of a James Bond finale, the cavernous, converted power station of Metropolis Studios is all walkways, bridges and industrial lifts. At the ...

Chris Ingham: What was the selection process for your Miles Davis tribute album Travelling Miles? ...

Wings: Paul McCartney And Wings: Band On The Run

Wings: Band On The Run

IN THE immediate post-Beatles period, Paul McCartney was a critic's whipping boy. Compared to the lustrous pop of Abbey Road, the open-hearted panoply of All ...

On a three-man mission to revive the grand piano’s sex appeal ...

IT'S TEMPTING TO IMAGINE that in eschewing guitars and positioning the grand piano as the centrepiece sound of their three maverick alt-pop albums, the Ben ...

IT'S HARD to overstate Duke Ellington's stature as a 20th century musician. Honoured by world leaders, respected by legit' cats and revered by jazz musicians ...

Macy Gray: Lady Sings The Blues: Macy Gray’s On How Life Is

This is an unpublished interview with Paddy McAloon on the release of 38 Carat Gold: The Best Of Prefab Sprout. ...

THERE IS THE aura of legend surrounding the business of Pharoah Sanders. The fez, the dashiki, the Egyptian Prince goatee and the very name conjures ...

Steely Dan: Joined At The Hip

IT'S BEEN 20 YEARS, A HIATUS ALMOST unheard of in rock. In the 1970s. Walter Becker and Donald Fagen – studio auteurs infused with the ...

He’s been assailed by business bosses, punk rivals and ex-bandmates. Now, with a landmark fifth album in the can. Paul Weller shows Chris ...

PAUL SIMON AND I are alone in a large, dim, empty room in a Manhattan rehearsal complex and he’s zippered up to his throat, ever-present ...

PAUL SIMON and I are alone in a large, dim, empty room in a Manhattan rehearsal complex and he’s zippered up to his throat, ever-present ...

I WAS IN the Lionel Hampton band in ’49. Betty joined months after me, we picked her up in Detroit. We never sang together, everybody ...

THOUGH CONFUSING at least as many as it impressed at the time, seven months and several listens on, the litany of anguish that is Kid ...

NEITHER AS gritty as Dylan or as political as Ochs or Baez, Simon And Garfunkel's folk-rock style had a cool, preppy awareness and an alluring ...

Steely Dan: Everything Must Go

Excellent 18-song retrospective solo recital from one of the great individual singer-songwriters. ...

After the world domination of her debut, the lovely follow-up. ...

Francophile jazz singer makes for a better class of busker at the Edinburgh Festival. ...