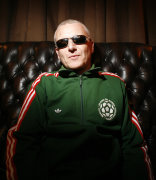 Carl Loben has been a music journalist for 20 years. He wrote for the weekly music paper Melody Maker for most of the 1990s, and was on the staff at DJ magazine for most of the noughties. He’s currently a freelance journalist, based in Brighton.
After gravitating from Leicester University with a degree in Philosophy in the late 80s, Carl set up an independent entertainment guide for the East Midlands – INTO magazine. Following a brief spell on East Anglia what’s on guide Preview, he moved back to his home city of London to become a freelance journalist.
Landing a role at Melody Maker, he wrote about the Britpop, riot grrrl and agit-rock band scenes as well as emerging electronic music styles such as drum & bass.
Moving to DJ magazine just before the Millennium, he covered all the diverse electronic music styles and finished up as deputy editor before moving to Brighton and reverting back to freelance journalism once again. He wrote the electronic music section for the Billboard Music Encyclopaedia, and wrote for MOJO magazine for most of the noughties too.
As well as writing, Carl also produces music, runs a record label – Westway – and DJs in clubs and at festivals. He's interviewed many notable figures within music, and recently has started doing some lecturing too.

SHOULDN'T HUGGY Bear have split up by now? ...

Gravediggaz: The Pick, The Sickle & The Shovel (Gee Street 15tks/63mins)

GRAVEDIGGERS, morbid souls who don't usually have much to say. Gravediggaz, however... ...

SOUTHERN MUTHAS DO HAVE EM! ...

"IT WAS either this, or scaffolding." Carl Cox, perhaps the biggest DJ on earth, in more ways than one, is relaxing in the Italian morning ...

CITED BY MANY electronica artists as an early influence, Depeche Mode began life as chirpy synth-poppers in the early '80s before moving into superb clangers ...

IN CONTACT, Jodie Foster climbs into the capsule, straps herself in, and mentally prepares for the impending voyage. The aliens have kindly given Earth/the US ...

THERE HAVEN'T been many Dots in pop — Dot Cotton from EastEnders has yet to commit to vinyl — so when you hear the name ...

UK HIP HOP is only ever any good when it doesn't try to copy Americans all the time. A prodigious talent like Roots Manuva has ...

R&B. WE HATE that schmaltzy shit, don't we? Well, no, not when it's as sassy and spiritually uplifting as Melky Sedeck. ...

There's nothing we like better than brilliant new bands. So what could beat joining a booze-fuelled double-bill of MUSE and CAY on the road? ...