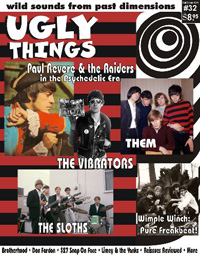 Established in 1983, Ugly Things is a music magazine, based in La Mesa, California. Originally published annually, it is now published twice yearly and covers mainly 1960s Beat, Garage rock, and psychedelic music ("Wild Sounds From Past Dimensions"). It is now accompanied by an online edition.

Outsiders, The (Holland): Wally Tax of the Outsiders: An Interview

OF ALL THE GREAT BANDS who sang in English as a second language in the 1960s, the Outsiders were the coolest. It's a subjective judgment, ...

IN THE SPRING '78 issue of Bernie Kugel's cool fanzine Big Star there is an article by Miriam Linna called "The New Sounds of the ...

ALTHOUGH EATER were at the centre of the great British punk rock storm of 1976, they've never been treated with the cap-doffing respect granted to ...

IF SOCRATES, the George Carlin of his day, was right that "the unexamined life is not worth living," then The Monkees have nothing to worry ...

GENE CLARK of the Byrds was many things - a charismatic stage presence in a '60s band that became an American icon; a gifted and ...

(Note: the following piece was written prior to the recent release of the wonderful UK 2CD set At Full Speed: The Complete Sire Recordings, which ...

LET'S TALK, BRIEFLY, about what constitutes a biography. From James Boswell writing in the late 1700s about Dr. Samuel Johnson to Hunter Davies in the ...

NOTE: This was written as an introduction to a brilliant Ugly Things article by Johan Kugelberg called "No More Jubilees: Punk Before Punk", which aimed ...

FIRST OFF, any regular reader of this publication whose home doesn't house a copy of this DVD–man, where are you at? Filmed before a Santa ...

YOU GOTTA HAND it to the folks at Chrome Dreams. Recognizing a good thing, they've come up with yet another "unauthorized" Zappa title (their fifth, ...

OF ALL THE hard-luck tales about musicians who died before their time – Brian Jones, Hendrix, Joplin, Morrison, Parsons, Bloomfield, Cobain, Winehouse, et al. – ...

JAN SAVAGE (born Buck Jan Reeder), guitarist with American rock band the Seeds, died in early August, according to a report in The Ada News ...