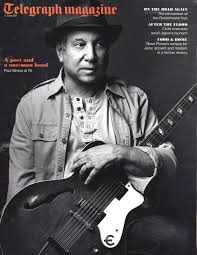 Telegraph Magazine is a colour magazine which forms part of the Sunday Telegraph newspaper in the UK.

At the age of seven, Jarvis Cocker realised he was not immortal. Now the Pied Piper of his generation has decided the end is nigh. ...

TOM WAITS FIRST made his name by singing songs about that area of town marked out by the pawnbroker, the tattoo-parlour and the Greyhound bus ...

SKIN WALKS into her manager's house in St. John's Wood and immediately shows off her jeans. "I wanted a pair of trousers that go VROOM ...

THE SOUND OF DISTANT laughter echoes up the corridor. As it comes closer - suffusing the chilly corporate air of Sony's West Soho HQ with ...

Usher: Rise of the House of Usher

APPEARING ON Channel 4's Richard Blackwood Show during his last visit to Britain, clean-cut US R&B star Usher Raymond IV startled the crowd with the ...

Phil Spector produced some of the greatest pop hits of all time, from 'Be My Baby' to 'Imagine'. Notoriously eccentric in his heyday, his slow ...

Kanye West: "Arrogant? Not me. I just knew I was going to win…"

EVERY TIME Joanna Newsom walks into her house she has cause to reflect on the ways that nature encroaches on human affairs. "I think there ...

Thirty years after she sold her soul to the devil and, with Fleetwood Mac, set new records for rock'n'roll overindulgence, Stevie Nicks has somehow lived ...

With the launch of his first solo album, Noel Gallagher reflects on life without Liam, turning down The X Factor and giving up the parties. ...