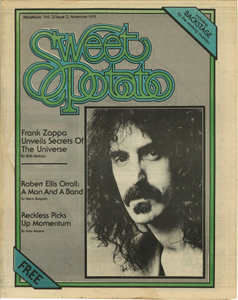 Sweet Potato was a music magazine started in Portland, Maine in 1975 by David and Ryan Wright, with a Boston edition that opened in 1978 and a Minneapolis edition that debuted the following year. (The Minneapolis magazine morphed into City Pages.) Sweet Potato got its wings during the punk and post-punk era, but its coverage, for a regional magazine, was extensive and wide-ranging, with stories on pop, jazz, classical and country music as well as on The Clash, Ramones, The Police, The Tom Robinson Band and the Cars. It, like the Boston Phoenix, launched a number of key rock writers throughout the area and across the country. The magazine folded in the late-'80s. (It has no on-line presence, but a couple of its writer-editors, Jim Sullivan and Dean Johnson, have resurrected some of the hardcopy stories and scanned them for on-line placement on Rocks BackPages.)

IT'S EERIE and disturbing news to learn about the death of someone with whom you had enjoyed a long and enjoyable conversation just a few ...

Robert Fripp: A Most Delightful Discourse With One Small, Mobile Intelligent Unit

THE USUAL ways to write about most rock artists are, I'm afraid, inadequate when one's subject is Robert Fripp. Generally, the writer's task is to ...