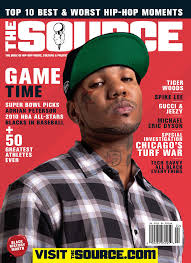 Founded as a newsletter in 1988 by two Harvard students, The Source is now a monthly full-colour magazine covering hip-hop music, politics, and culture, published in New York.

Outkast: OutKast In The Promised Land

FINAL EXAMS AT Morehouse College were a bitch. Nearly four in the morning on a starry autumn night years ago, I found myself making a ...

THE SUBJECT is female singers, and we’re gonna make it easy on ya. ...

Profile and Interview by Amy Linden, The Source, 1998

"BEHOLD. BEHOLD. BEHOLD." Busta Rhymes is quietly repeating the word under his breath He’s in LA, in the thick of sessions for his third solo ...

WHAT DOES it say about hip-hop when one of the better hip-hop records of the year contains little actual rapping? Thoughtful, passionate, purposeful and unmistakably ...

Report and Interview by Michael A. Gonzales, The Source, September 1998

DRESSED IN A black T-shirt with THE LOVE MOVEMENT emblazoned in silver on the back, baggy jeans, and a blue denim fisherman's cap pulled down ...

THINGS ARE ABOUT to change. Trust. The rap industry may soon find itself caught out there as many hiphop fans seek sounds more suited for ...

Common: Against The Grain: Common