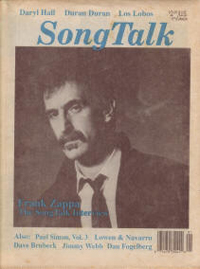 "There is a girl in New York City Who calls herself the human trampoline And sometimes when I'm falling, flying or tumbling in turmoil I ...

"Some stories are magical Meant to be sung Songs from the mouth of the river When the world was young And all of these spirit ...

Judy Henske: Only a Henske: The Judy Henske Story

Squeeze: Up The Junction With Difford & Tilbrook

WHEN YOU TALK to Chris Difford and Glenn Tilbrook of Squeeze, unlike other collaborators who finish each other's thoughts, they sit at opposite ends of ...

SIMON AND GARFUNKEL are rehearsing. We're at the Paramount theatre in Manhattan on an October afternoon, about halfway into their unprecedented 21-night series of sold-out ...

Leonard Cohen: Inside the Tower of Song

I said to Hank Williams, "How lonely does it get?"Hank Williams hasn't answered yet.but I hear him coughing all night long,a hundred floors above me ...