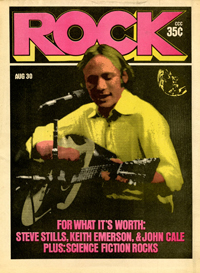 Launched in 1969, Rock was a New York-based bi-weekly music magazine in newspaper format. It ceased publication in the mid-1970s.

One of the finest bassists and composers of the 20th century ...

A breakaway from restrictive formulas ...

THERE ARE lots of rumors circulating the rock industry, especially about Alice Cooper. However, the one about Alice having to get rid of his old ...

Savoy Brown and Them Changes

2012 NOTE: I was young, probably a bit too much of a fan, and just looking to do a superficial, light-hearted story, but we now ...

2013 NOTE: I was into Deep Purple so when I noticed this debut album by a hitherto unknown group called Elf was produced by Roger ...

2021 INTRODUCTION: Wrote this story based on interviews I had with Deep Purple the night they played Pirate's World in Dania, Florida, on December 16th, ...

Report and Interview by Jim Esposito, Rock, 7 May 1973

BEN GANSELL is a stocky, heavy-set man of medium height with a full head of bristly hair which he keeps conscientiously trimmed just a shade ...

The Who on the Beach

THE POOL AREA of The Doral Hotel on Miami Beach was virtually empty. A few children splashed in the water, a small group of double-knit ...