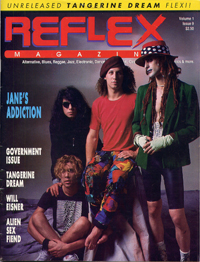 Reflex was an alternative music and culture magazine published monthly in New York between 1987 and 1992.

SUBSTANCE, MESSAGE, uprising, controversy, extremity, intelligence – were all on display at Beacon Theatre in the form of Megadeth, churning up anger and angst among ...

"AS A KID, I was sort of a science nerd," says Mitch Easter. Despite his Einstein-like beginnings, this young boy from Greensboro, North Carolina would ...

GRABBIN' AND RIFFIN', skankin' and ska – there's a revolution happenin'. Combining all the noises, making them all one, Fishbone leads the masses to have ...

THIS IS THE story of a recordist – a man that has made it his business to preserve moments in time and memories of his ...

STANDING IN THE shower thinking of what I should write about, I couldn't help but sing the words to one of the songs on the ...

OFRA HAZA... when spoken, the name rolls lyrically from the tongue, flowing in fluid phonetics, ancient rhythmic mystical syllabications closer to the soul than to ...

I WAS IN THE Gramercy Park section of lower Manhattan, entering a black door under an awning labeled "Fat Tuesdays." I was on a pilgrimage ...

GNASHING, SUBTERRANEAN youth culture on the verge of intellectual upheaval, coming to awareness in late '70s decadence, and coming of age in the post-anarcho-punk revolution, ...

The Mission U.K.: Angst And Ecstacy

IT'S A GRAY DAY in New York City, and God's pissing on the midday masses as they hustle to their power lunches. The weather matches ...

AS A high profile jazz musician, Kamasi Washington is accustomed to improvising, just not in the ways that he's been forced to over the past ...