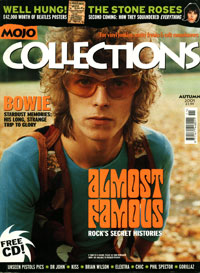 IN THE STANDARD ANNALS OF "black rock", the acknowledged progenitors tend to be the usual suspects – Hendrix, Sly, Love. But there was another act ...

Eminem was just another basement hip hop hopeful, then he had an exceedingly profitable trip to the loo. Dorian Lynskey plots a wax history. ...

Chic: These Are The Good Times

THINK CHIC, think chic – a passport back to Studio 54, 70s hedonism; good times, guaranteed to bring gravity to the flapping flares and mirrorball-twirling ...

Even the coolest stars had to learn their craft at some point and Lou Reed was no exception. Kieron Tyler picks the dark one's early ...

STEVE SCIPIO pauses. The bass player and songwriter with Cymande is trying to recall what exactly his band's biggest hit, the reggae-funk masterpiece 'The Message', ...

ALL THE EXTRANEOUS talk of tantrums and tears, beehives, booze and bisexuality has, over the years, tended to overshadow the fact that Dusty Springfield was, ...