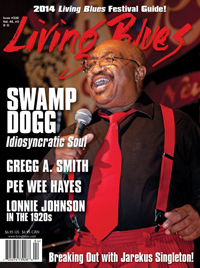 Living Blues is a bi-monthly magazine, first published in Chicago, Illinois in 1970, and focused on covering the African American blues tradition. It is now published by the Center for the Study of Southern Culture at the University of Mississippi.

Talks About Roots, Rights, and Rhythms ...

MY ENTREE into the world of bluesman Bumble Bee Slim came not by choice, but by chance. It happened a few years ago in the ...

FOLLOWING A STRUGGLE with cancer, legendary saxophonist Fred Ford died on November 26, 1999. He was 69. Ford, a pillar of the Memphis music community, ...

Retrospective and Interview by Jerry Zolten, Living Blues, May 2001

Odetta: Lookin’ For A Home

IN 1949, THE year that Leadbelly died, Odetta made her first appearance on stage – in a Los Angeles production of Finian’s Rainbow. ...

THESE 28 TRACKS, spanning 15 years of the Mighty Hannibal’s career, epitomize Southern soul at its finest – and most obscure. ...

EARLIER THIS YEAR, the North Mississippi All Stars received a nomination for a Grammy (Best Contemporary Blues Album), the LB Critics' Awards for Best Debut ...

IN THE LAST decade R.L. Burnside, the best-known purveyor of Mississippi hill country blues, has become almost an anti-hero of the blues scene. His label, ...