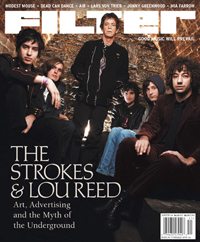 Filter is an American music and off-beat entertainment magazine published 4 times a year.

SOME VELVET MORNING (or evening, perhaps) back in 1940, a child was born of a very, very famous father. SHE was doubtless a vision of ...

Interview by Ken Scrudato, Filter, May 2006

AND THEN there were three. The three were called Brian, Nick and Karen (O), and together, they were also called the Yeah Yeah Yeahs. Like ...

THE DOOMSAYERS, the rapture-mongers, the manic street-corner preachers, the postmodern theorists...they all completely missed it. With laser-beam paranoia but eyes wide shut, they all claimed ...

NOT JUST a few otherwise sophisticated human beings would likely feel less uneasy naked and unarmed in Northern Afghanistan than present in a room when ...

Björk: Army Of She

COMES A TIME in every girl's life where she's got to reach for the trigger and take aim at the motherfuckers (usually mostly guys) who ...

THE ESSENCE OF DEATH, much like that of war, rests in how it has irreparably changed those left to grapple with its aftermath. Its effects ...

I WAS IN ZURICH recently and found myself at the rather legendary Cabaret Voltaire. It was in that very same place, all the way back ...

The xx: Doom On The Dancefloor

IF YOU’RE NOT completely averse to new age poppycock, it’s interesting to note that according to numerologists, the letter "x" indicates sensual, artistic, and temperamental–which ...

Interview by Ken Scrudato, Filter, May 2010

WAY BACK in 20th Century England, a gang of four insurrectionist-minded punk motherfuckers were to be found causing such an anarchic, subversive uproar as to ...

DESPITE BEING BORN into the choking, mechanized wasteland that was early '80s urban England (Dear Old Blighty had, sadly, become Dear Old Blighted.), ...

Björk: Thrall of Sound: An Elemental Conversation With Björk

Nick Cave & The Bad Seeds: This Moral Coil: A Conversation With Nick Cave

"ASK ABOUT our Seven Deadly Sins packages," tempted the intentionally sexed-up outgoing recorded message of the hotel in Perth where Nick Cave was holed up ...