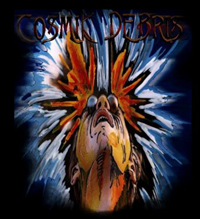 Cosmik Debris was a monthly online music magazine. It was launched in 1995, and ceased regular publication in December 2005, although a final issue was published in March 2007.

The Sex Pistols: 10 Reasons Why the Sex Pistols Didn't (or Couldn't) Save Rock 'n' Roll: In honor of Julien Temple's The Filth And The Fury

1. MALCOLM McLAREN Never before in the long and illustrious annals of popular music history has a man been handed so much raw talent atop a ...

CULTURALLY, CANADA is without a doubt one of the most diverse nations on the planet, and with its record stores awash since the 1950's in ...

Pat Boone: Should Pat Boone be Inducted Into the R'n'R Hall of Fame?

SEEMS A simple, even innocent enough little inquiry, doesn't it? But I swear, seldom in all my quarter-century-plus of Piggery has one topic – one ...

Pat Boone: My Breakfast with Boone

AS BIZARRE as even I still consider this lil' factoid to be, Yours Truly honestly did spend the majority of the Reagan administration touring Canada's ...

[What follows is the concluding portion of our Pat Boone trifecta, part one being the infamous RnR Hall Of Fame Poll, which somehow led straight ...

IT SEEMS EVERY time Our Boy Bob scores big with a contemporary piece of new work, he feels secure enough to bless us with another ...