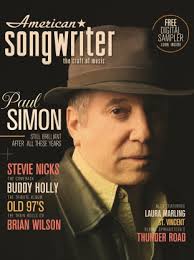 American Songwriter is a bi-monthly magazine, launched in 1984, with in-depth interviews with up-and-coming, established and legendary songwriters. It also covers recording technology and reports on the business of music publishing with interviews and insight from publishers, producers and other industry professionals.

HE IS sitting right there on the sidewalk, eating red snapper, heavy-lidded eyes taking in the world around him and engaging with the various people ...

Journey: How 'Don't Stop Believin'' Became Such a Monster Hit

POP STARS OF disparate ages and musical styles, when forced to share a stage, can be as awkward together as "strangers waiting up and down ...

Buddy Holly, The Rolling Stones: Behind The Song: 'Not Fade Away'

AT THIS YEAR'S Grammys, 67-year-old Mick Jagger was out from the get-go to tell the audience how it was gonna be. He wasn't ceding anything ...

IT'S SURPRISING THE American Association of Anesthesiologists hasn't chosen Emmylou Harris as the best voice to hear when awakening from surgery. ...

MOST OF JAMES MCMURTRY's songs are populated by rural and small-town characters, but these are not pastoral hymns to the easygoing joys of country living. ...

WHERE DID the Rolling Stones get the title for their 1970 live album, Get Yer Ya-Yas Out? From Blind Boy Fuller's 1938 single of the ...

RUTH UNGAR understands that a lot of people can't tell the difference between bluegrass and old-time music. Anytime they see a group with a fiddle ...