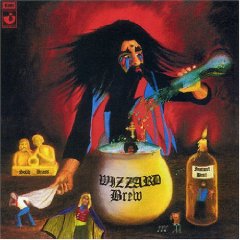 ...AND I WAS STILL raving about it the next week: And they had this piano player (assulter more like it) named Pianos Demolished who pounded ...

The Wonderful Wizzard of Wood

ROY WOOD is one of those rare musicians who has never lost sight of the excitement and imagination that make rock worthwhile. ...

COMMERCIALLY the death of the Move has been very successful: both Wizzard and the ELO have had top ten hits. ...

"Liverpool today – Birmingham tomorrow. That's the forecast for the beat business in rock music. Yes, the Brum Beat is all set to take over ...

He's been called the Al Capone of pop, and the reputation's, shall we say, a little heavy. A nervous Robert Partridge talks to Don Arden... ...

FOR A MUSICIAN of his acknowledged brilliance, Roy Wood has shown an inordinate interest in paying tribute to the past works of others. ...

IN WHICH it begins to look disturbingly like influences are dangerous toys indeed. ...

Roy Wood: Yeah Roy, But What Do You Sound Like?

THERE WAS the time that Roy Wood shoved his jeans in the washing machine and ended up with one very wet, very tattered and very ...

WHEN OLIVER Ulyses Adrian ('Roy') Wood joined the ranks of Birmingham's professional musicians back in 1964, few observers could have guessed that he would evolve ...

Wizzard: Making 'I Wish It Could Be Christmas Every Day'

Mike Burney (sax, Wizzard): I'd been doing really boring big band gigs on the ballroom circuit so when Roy offered me a job in Wizzard ...

TRIPS TO the supermarket can take twice as long in December when you're Roy Wood. The humdrum chore of grocery shopping is constantly interrupted by ...