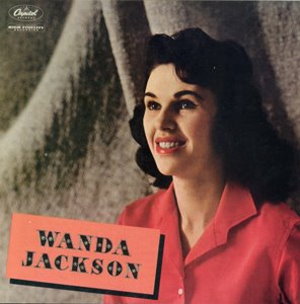 The erstwhile Fujiyama Mama talks about combining singing rock'n'roll with her deeply held religious beliefs; considers cover versions of her hits, and recording her recent rockabilly album in Sweden!

THE FOYER OF the Hammersmith Odeon was like Middle America gone London town, except the folks were mostly British and there wasn't a stetson to ...

GEORGE JONES is one of the major stars of American country music but, without the help of a chart single to attract the MOR audience, ...

WANDA LAVONNE Jackson was, simply and without contest, the greatest menstruating rock 'n' roll singer whom the world has ever known. Born in Maud, Oklahoma, ...

Where Are They Now: Wanda Jackson

The original 'Fujiyama Mama' wailed to the rockabilly beat — but now she's moved by a stronger power ...

WANDA JACKSON was the original Riot Grrrl. In the late '50s, she shook, rattled and roared next to Buddy Holly, Jerry Lee Lewis and boyfriend ...

WITH A VOICE LIKE A CHAINSAW swallowed by a little girl, Wanda Jackson's brand of "shake 'em up, baby" is as kitten-with-a-whip as ever. The ...

IN 1994, when Wanda Jackson turned 57, the creative phase of her career was apparently over. Though she continued to sing gospel in American churches ...