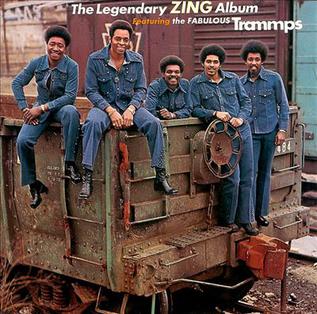 WITH 'Hold Back The Night' literally one step away from topping the British soul charts, now is the ideal time to trace back the long ...

"All You'll Ever Be Is A Bunch Of Trammps"

TRACKING DOWN the Trammps: you'd think a group who had three big hits this year would be easy to find, right? ...

The Trammps: Zing Went Bummie And The Bums

THIS FEATURE could so easily have been devoted to – wait for it! – Bummie & the Bums! Who is this Bummie character I can ...

If Where the Happy People Go showed the Trammps moving perilously close to routine disco, this followup is proof positive that good things can still ...

A YEAR AND a half ago, the Trammps were a band of promise. They were also a lot of fun. Presided over by MFSB drummer ...

Best Dressed Trammps You Ever Did See

"WE FEEL that maybe this one is going to go straight to the top!" exclaims Harold 'Doc' Wade, one member of the five-member Trammps who ...

How Chaplin Helped Give Birth To The Trammps

The re-release of 'Disco Inferno', by way of its success in Saturday Night Fever, could give Trammps their first gold disc. B&S talks to Earl ...

IF THERE is such a thing as disco-land's favourite group, then that would surely have to be Trammps – five young men from Philadelphia who ...