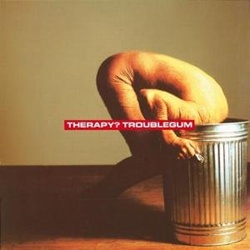 The terrible trio from Belfast tell CATHI UNSWORTH all about their new Pleasure Death LP and why they are fascinated by the sound of vacuum ...

BALM BEFORE THE STORM ...

Quietly, stealthily, THERAPY? have crept up on the rock world to become the "indie" band it's OK for Beavis & Butthead to like. Even stranger ...

SHAKEN BUT NOT STIRRED ...

SOME PEOPLE work down in the sewers. Others dispense hard-earned wisdom to spotty adolescents in the name of hard rock. Which job would you prefer? ...

THERAPY? ALMOST lost their minds back there, OD'ing on women and drugs. So they changed – no more cartoon punk behaviour for them. Instead, as ...

You know Therapy? Northern Irish moshers with a headline spot at Castle Donnington one minute, Mercury Music Prize nomination the next. Rock from a hard ...