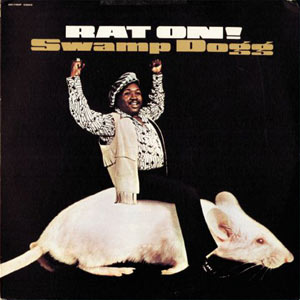 SAN FRANCISCO – Swamp Dogg had just finished taping a four-song set for a quadraphonic television show, and now everyone was up in the control ...

Swamp Dogg don’t fuck around. Besides writing or co-writing (many with U.S. Bonds) eight of the album’s 10 songs, he arranged produced, played piano, did ...

"WHERE ELSE BUT in America could a person own a Rolls-Royce, an Eldorado Mark IV, a Mercedes limousine, an estate in Long Island, an apartment ...

Swamp Dogg: Have You Heard This Story??

IN ONE SENSE Jerry ‘Swamp Dogg’ Williams suffers from the same ailment which all but debilitated acts like Slade or Roxy or (until recently) Randy ...

KEEP YOUR ears pimmed back for Bootsy's Rubber Band, a nifty little album soon to be released by WEA. ...

"If you know the extension of the party with whom you wish to speak, dial it and stop wasting our time! If you have money ...

Cover Story: A Dogg with Attitude

How a pint-sized pooch danced for his record label. ...

"WHEN I FELT like I needed profanity, I used profanity," Swamp Dogg begins. And as he cheerfully swears his way through his 50 years in ...

IT WAS EARLY May, the gig was two weeks away, and things weren't looking good for the star of the show, Jerry Williams Jr. a/k/a ...