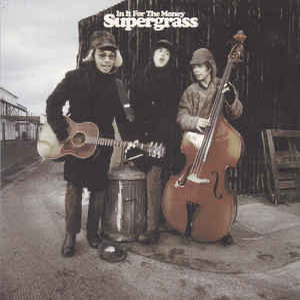 Supergrass: In It For The Money (Parlophone)

Review and Interview by Max Bell, MOJO, May 1997

IT SEEMS UNLIKELY THAT SUPERGRASS will ever scale the wails of hype built around those British bands whose media inflated self-importance exceeds their artistic merit. ...

Combes brothers Gaz and Rob ruminate on their then-current album Road to Rouen, their fraternal relationships, the stresses within the band, and a whole lot more.

Oxford's SUPERGRASS put the POP! into apoplexy and inject hyper-charged glam into the Nineties Brit guitar thrill. Plus! Their second single — and first hit ...

Supergrass, The Bluetones: Caught By The Buzz

Have you heard the new Maker motto? They're On The Cover On Tuesday, They're In The Chart On Sunday! First Portishead, then Sleeper, and now ...

Lycanthropissed-up!: Supergrass: I Should Coco (Parlophone)

A scary rock 'n' roll wolfchild who roams the streets, high on drugs and booze, in search of whatever cheap thrills the night has to ...

Supergrass: Diary of an LP

From four-track bedroom demos to finished masters. SUPERGRASS' debut LP, I Should Coco, has been guided by the hand of producer SAM WILLIAMS. TOM DOYLE ...

Now trespassing in the charts, three princes of rascal rock… ...

Supergrass: I Should Coco

I Should Coco begins with one bloke muttering "know wot I mean?", another shouting "ONE TWO FREE FAW!" and an almighty shower of drumming. It ...

IN SPINAL TAP, that penetrating cinema verité dissection of the music industry, various scenes are offered as examples of the rampant absurdity of the rock'n'roll ...

IT'S A GLORIOUS SUMMER DAY in Oxford, city of dreaming spires in the heart of England. Three young tykes laugh and joke with each other ...

Supergrass: Whatever Happened to the Likely Lads?

Almost exactly a year ago, when The Maker put them on the cover for the first time, SUPERGRASS were pop's likeliest lads, cheeky young upstarts ...

Supergrass were named best new band at last week's Brit awards — but why? Noisy they may be, but subtle they're not. Caroline Sullivan went ...

Last week, we gave you The Return of SUPERGRASS. This week, we open psycho-bible The Book of Questions and fling some brain-frazzling enquiries at The ...

TWO YEARS AFTER RIDING THEIR CHOPPERS TO NUMBER ONE, BRITPOP'S BOY WONDERS ARE BACK WITH A 'DIFFICULT' SECOND ALBUM ABOUT POWER, CORRUPTION AND POST-ADOLESCENT ANXIETY. ...

SCALING A learning curve that would do the dons of their hometown university proud, Supergrass, from Oxford, England, have graduated from rambunctious adolescence to credible ...

Just Alright on the night ...

Supergrass: In It For The Money

GAZ COOMBES inadvertently summed the whole thing up himself earlier this year. Speaking of his newly-shedded hair, the Supergrass singer professed his absolute astonishment at ...

WE HEAR AN awful lot about how Oxford is still the gateway to eminence in thrusting new young Britain, but what about Wheatley Park Comprehensive? ...

CALL IT PRE-MILLENNIAL psychosis, call it nervous exhaustion or call it self-pity, but you can count the pop people who haven't battled some kind of ...

Supergrass: "It Felt Really Smart to be Doing it Again"

A BLINDING THIRD ALBUM. A WORLD TOUR. COLLABORATIONS WITH THE MUPPETS AND ALI G. ALL IN A YEARS WORK FOR SUPERGRASS, AS GAZ COOMBES TELLS ...

IF IT WASN'T quite the summer garden party it should have been, Radiohead's big homecoming bash at Oxford's South Park was mostly (or at least ...

Supergrass: Life On Other Planets (Parlophone)

A decade in the music business hasn't hurt Supergrass. In fact, they're quite happy with their status as Britain's fifth favourite band, finds Ian Gittins. ...

NICE TITLE. (It references the fourth Ramones album, where Tommy added both acoustic guitar and solos, a pin-perfect mixture of the NYC band's minimal and ...

WHILE RECORDING their fifth album in a converted barn in Rouen, Normandy, may have given Supergrass an opportunity too good to miss for the title's ...