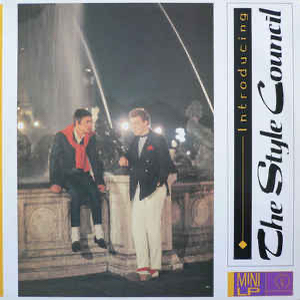 The Style Council: The State of the Nation's dress by Paul Weller

"I SUPPOSE PEOPLE find it difficult to penetrate me," offers the pale young man in the white mac, "they're not sure whether I'm really deep ...

FIRST OFF, SOME striking things. The man who used to specialise in doing soul songs really badly is now fond of doing funk standards reasonably ...

But three's just that little bit cosier. Neil Tennant has a tête-à-tête-à-tête with The Style Council. ...

ME AND my ever-changing moods. One minute I hear 'Strength Of Your Nature' and think Paul Weller's cracked it, next I'm hearing some snippet of ...

OUTSIDE, COPIES of Socialist Youth are on sale and touts are trying to buy tickets because they can resell them for twenty quid to those ...

The Style Council: My Ever Changing Moods (Geffen)

GRANTED, THAT Paul Weller is a talented guy who can concoct swell rock songs and crank out a pretty fair guitar lick. But the truth ...

LEADING THE Jam, Paul Weller was usually eloquent about the ineloquence of youth. Now he's an adult, and he's learned all about monetarism (it's bad) ...

"It's no good just complaining in your beer about things — you've got to come out and say it..." So says Spandau Ballet's Gary Kemp. ...

LISTEN TO the wordly-wise Cappuccino Kid: "...this affair of the heart, once it began, dispelled all the bitternenss I felt at the world, and gave ...

The Style Council: The Cost Of Loving (Polydor)

A REMARKABLE fellow, this Paul Weller. It's a strange journey he's made over the last decade, but stranger still is that he's managed to take ...

The Style Council: The Cost Of Loving

IT'S FOUR YEARS now since Paul Weller knocked The Jam on the head and launched his new group with "Merton" Mick Talbot. Ever since the ...

THE COVER OF The Style Council's most blatantly angry single, 'Walls Come Tumbling Down', bears not a picture of rioting or the Prime Minister on ...

"YOU SHOULD WRITE THAT LETTER," Paul Weller' is telling his press agents, Pippa Hall and Jane Wilkes of Monkey Business PR, referring to a particularly ...