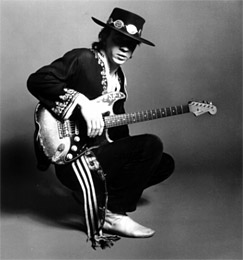 A TOWERING DISPLAY OF BLUESICIANSHIP ...

AS THE irascible rhythm & blues guru of New Orleans, Ernie K-Doe, is wont to say when seized by a philosophical spirit, "It's not understanding ...

DAVID BOWIE didn't discover Stevie Ray, the power blues specialist who by the sound of this solo LP was sorely tempered on Bowie's tepid Let's ...

OK, STEVIE RAY VAUGHAN can play the everlovin' bejeesus out of the guitar, but packing a flash Stratocaster just ain't enough.  ...

STEVIE RAY VAUGHAN IS ABOUT NOTHING BUT MUSIC, WHICH SETS SOUL TO SOUL DRAMATICALLY APART FROM ITS COHABITANTS ON THE 1985 ALBUM CHARTS ...

A COUPLE OF minutes before the lights came on were almost worth the price of admission. Already steaming with the sweat of an audience that ...

NEXT WEDNESDAY, Stevie Ray Vaughan plays Great Woods Center for the Performing Arts, a concert co-sponsored by Miller Genuine Draft. That's about as close to ...

STEVIE RAY VAUGHAN has died, and with him goes the spirit of Jimi Hendrix once again. Vaughan was linked to Hendrix throughout his playing life. ...

Jimmie Vaughan: Picking Up the Pieces

After the death of his brother, Jimmie Vaughan carried on ...

Blue Smoke: The Life and Death of Stevie Ray Vaughan

NINE YEARS AFTER his death, Stevie Ray Vaughan’s influence only continues to grow. It can be heard in barrooms and arenas around the globe, in ...

YEAH, HE NEVER played alternative rock, and to him hip-hop was something the Easter bunny did. He also wore his influences like a neon suit. ...

Ten years after his death at 35, Vaughan's blues legacy is commemorated by four hours of his music on three CDs and a DVD. ...