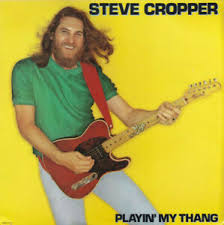 On Otis and the making of 'Dock of the Bay', the disputed history of 'Green Onions', and on touring with Neil Young: the Memphis guitar-slinger gives the lowdown.

This Steve Cropper interview begins a series on Stax Records in Memphis. ...

IN THIS FINAL installment of the Steve Cropper interview, Steve gives some excellent advice to guitarists who want to become studio musicians. We hope you ...

EDDIE FLOYD, born June 25, 1935 in Montgomery, Alabama, grew up with the idea of entertaining as a profession. Eddie idolized Johnny Ace from the ...

"The Otis Redding I Knew", by Steve Cropper

LOOK AT THE picture of Steve Cropper on his new album cover and you see what appears to be a quiet, reserved, young man – ...

Cropper: The Living Legend from Memphis

ROY CARR, who joins NME this week, conducts an Ask-in with... STEVE CROPPER

Richard Williams with the first of a series of profiles from America's soul centre... ...

Steve Cropper: The Man Who Wrote The Book

THE LATE sixties were a time for guitars, and five musicians — fifty fingers — appeared to naturally jump to the center of attention: Jimi ...

Cropper: Into The Spotlight

POP FANS shouldn't have much difficulty in identifying Wilson Pickett with 'Midnight Hour' or Otis Redding with 'Dock of the Bay' but mention the name ...

GUITAR HEROES come cloaked in the mystique of the iconic loner. We call them guitar-slingers because they are like western heroes who ride into town ...