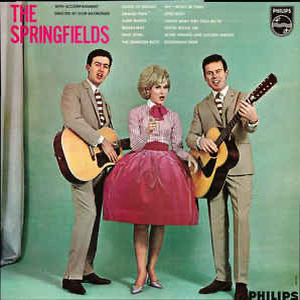 SAID TOM Springfield (of the Springfields): "You've no idea how stunned we were when 'Silver Threads And Golden Needles' got into the U.S. Hot 100. ...

Colder In Nashville Than Even Here Says Tom Springfield

MIKE PICKWORTH is the "new boy" of the Springfield's. He's the 21-year-old who took over when Tim Feild left to set up in the antique ...

The Springfields: The White Negress

"THAT'S WHAT THEY CALL ME" – DUSTY SPRINGFIELD ...

The Springfields: Hit Trio Get The Holiday Fever!

Another disc crashes the charts, but The Springfields still want that break! ...

The Springfields: All Change Springs Go For R and B

TOM SPRINGFIELD gave a gusty yawn over the 'phone, remarked, "I'm not with it this afternoon, mate" and asked for two minutes silence to put ...

The Springfields: Separate Careers and All Booming!