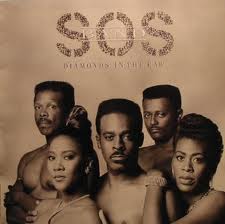 TWO CREWS, two solo artistes, SOS and Skyy occupy the amorphous middle ground between Clinton and Kool — no coke psychosis on the one hand, ...

The selling of soul, by our financial staff, Paul Sexton ...

The SOS Band: Sending Out an SOS

Tinker, Tailor, Soldier... the SOS Band are out on manoeuvres. Paul Sexton discusses tactics with one of the hardest working soul squads ...

The SOS Band: The Sweetest Tabu

Have the SOS Band stood the test of time, or are they sticking to the same old Jam 'n' Lewis formula? Paul Sexton asks Mary ...

"Sorry Lionel, but right now, we're busy with The Human League..." To turn down a job with Mr Richie these days you'd have to be ...

WE WEAVE a path through the wellie-wearers, unable to grasp how speechlessly bad this is. The beauty is beaten into beastliness and enjoys the experience; ...