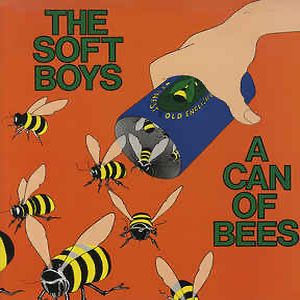 The Soft Boys, The Brakes: The Nashville, London

NOT AN evening for those with sensitive eardrums, this. Even these days when volume for its own sake seems to be a pre-requisite of too ...

Why it's safer to lack discipline than imagination ...

The Soft Boys: A Can Of Bees (Two Crabs)

TAKE THE "mystery" out of rock'n'roll and you're left with an evaluation of current rock'n'roll that relies upon the recognition of traditional principles or objects. ...

THE SPORTING SBs stepped down for Pylon, Athenians from Georgia, after their Music Machine extravaganza was blown out by a freak fire. Best described by ...

ROBYN HITCHCOCK is confused. At least, he's as confused as anyone who's been told they'll be called by a writer in America, with all the ...

The Soft Boys: Let's hear it for the boys

Retrospective and Interview by Robert Webb, The Independent, 13 April 2001

Cambridge, 1977: the unlikely birthplace of one of the UK's most influential bands. But by 1981 they were gone. Whatever happened to the Soft Boys, ...

THE ONE-TIME freaks are out tonight, suited and booted for this biz-only reintroduction to Robyn Hitchcock's reconstituted Soft Boys, in the tucked-away, locked-up Clerkenwell pub ...

Just who the hell is Robyn Hitchcock, anyway?

FUNNYMAN? Serious Artist? Ironic? Fey? Wry? Ask the average punter "Who is Robyn Hitchcock?" and you'll get a variety of replies, from "neo-psychedelic warbler" and ...