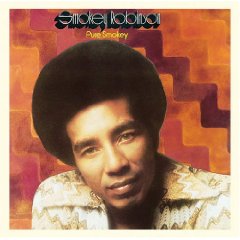 Smokey goes disco! The great singer-songwriter on producing and recording the soundtrack to the Big Time movie; giving the public what they want; his changing role at Motown; why he left the Miracles; his renewed love of performing; the uniform results of Motown's artist development department... and his current live show.

The Other Smokey Robinson — Songwriter

SMOKEY ROBINSON is the reigning genius of Top-40. Since the Beatles and the Beach Boys dropped out of the single-then-follow-up-album pattern aimed at the AM ...

Motown: The Gold In Their Bodies

Report and Interview by Philip Norman, Sunday Times, The, 1970

CONSIDERED TOGETHER at a party in New York, Nina Simone, the highly political folk singer, and Diana Ross, principal exhibit of the Motown Record Corporation, ...

Smokey Robinson: "The old ideas are dying just like Vaudeville did"

The Miracle of Smokey Robinson

ABOUT twelve years ago, Berry Gordy told Smokey Robinson how to write songs: "Every song should have an idea, tell a story, mean something." Smokey ...

Smokey Robinson: The Way You Do The Things You Do

THERE’s a new Smokey Robinson album out in the States, called One Dozen Roses. The natural reaction is to ring E.M.I. and ask them when ...

An Open Letter to Smokey Robinson

Smokey Robinson: The Way You Do The Things You Do

ABOUT TWELVE YEARS AGO, Berry Gordy told Smokey Robinson how to write songs. "Every song should have an idea, tell a story, mean something." Smokey ...

Author's update, 2019. "The Manchester Guardian? That's the best fuckin' newspaper in the world!" So David Crosby told me in early 1969. He had answered ...

Smokey Robinson: Motown And Mafia, And Why He's Quitting The Miracles

SMOKEY ROBINSON is a hell of a lot more than just a giant of soul or Motown. For more than a decade, his original and ...

IT'S JUST on a year since Smokey Robinson split from the Miracles to spend more time as an executive of the Motown Corporation. Now, he ...

Ex-Miracles leader, brilliant songwriter, Motown boss — Smokey Robinson is that rare thing in music: a legend in his own lifetime. He talks to MM's ...

MOTOWN announced the retirement of William "Smokey" Robinson in January 1972. ...

COULD THIS BE Smokey's What's Going On – the album to elevate him, like Marvin Gaye, from a singles-orientated soul veteran to an across-the-board contemporary ...

WILLIAM 'SMOKEY' ROBINSON has been referred to as the "greatest poet of our decade" and when one listens to the unique lyric style that the ...

YOU WON'T find a better textbook example of what's gone wrong with R&B over the past few years. Ticket prices, scaled from $10.00 down, were ...

"A VOICE on the stereo singing softly, Describing what I feel about you, The singer seems to know all about it, Seems like the writer ...

Smokey Robinson talks about his movie projects, recording and tour plans....and of his intention to visit Britain soon! ...

BILL-TOPPERS usually command a bigger stage area and more musicians than opening acts, but on this occasion the position was reversed for Viola Wills with ...

CAROLE GARDINER first saw Smokey Robinson in 1965, when he and his group, the Miracles, went to London as part of a Motown Revue. Since ...

"The fireside, the lamplight intimate and low, reverie with finger at the brow, and eyes that lose themselves in answering looks..."– Paul Verlaine, ‘La Bonne ...

THE TEST OF time is one accepted yardstick for determining great songs and, by that standard, Smokey Robinson certainly ranks as one of the premier ...

Waiting for a Miracle: NICK KENT reappraises the latest works of the doyen of '60s soul, SMOKEY ROBINSON ...

Smokey Robinson: Being With You (Tamla)/Marvin Gaye: In Our Lifetime (Tamla)

THESE ALBUMS are blueprints for romantic strategies. Hearing them together is like eavesdropping on both halves of a double date, comparing style of seduction. ...

IT'S HARD TO imagine that a Smokey Robinson concert could hold much in the way of surprises. Celebrating his 25th year in the business, Robinson ...

IT'S ALWAYS struck me as unfortunate that one of the greatest black soul writers of the past 20 years has one of the weediest voices. ...

In an exclusive interview, the master of the romantic vignette-in-song gets into some nuts-and-bolts talk about the creative process and gets down with some vintage ...

Berry Gordy: The Tracks of my Years

BERRY GORDY, the man who invented the "Sound of Young America", has seen the story of his monumentally influential Motown label told in a succession ...

Interview by Phil Sutcliffe, Q, May 1992

THERE ARE worse jobs than being Smokey Robinson. He's 52, with 2,000 songs down the pike, and still writing as easily as falling out of ...

AS FAR AS I KNOW, Smokey Robinson and Frank Zappa never met. However, if they had, five'll getcha ten they'd have ended up talking ...

Smokey Robinson: My Date With Smokey

On his seventieth birthday William "Smokey" Robinson grants exclusive access to Jon Wilde to talk cocaine, the roots of Motown and why The Stones still ...