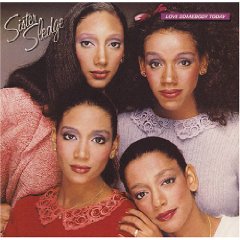 THE TRULY amazing dynamism of the four lovely ladies who make up Philadelphia's own SISTER SLEDGE are finally getting the kind of recognition which their ...

From the great lost soul label of Atlantic it came, writhing with synchronized funk, its many black heads chanting and wailing. Nothing like it had ...

SINCE IT'S a proven fact that rare talent cannot stay hidden indefinitely, you really shouldn't be at all surprised that Sister Sledge are currently reaping ...

I WAIT for new work by Chic's Bernard Edwards and Nile Rodgers in the way that I once waited for the latest items from Phil ...

WHOEVER CAME up with the idea of putting that beautiful family quartet, Sister Sledge, together with platinum Chic hitmakers, Bernard Edwards and Nile Rodgers, is ...

THE SNAP on the front may be Janet Reger boudoir and the one on the back corn row ethnic, but such image upgrading doesn't alter ...

Sister Sledge: We Really Are Family

THERE IS a certain closeness, a certain warmth about a family unit that is totally indestructible. It positively glows and when you are lucky enough ...

STRANGE ONES, to be sure, are the disco misfits that emerge from (ahem) the Chic Organisation Ltd, aka plain ole Bernard Edwards and Nile Rodgers, ...

Sister Sledge: We Are Family (Entertainment)

What do Southside Johnny, David Bowie, and Diana Ross have in common? ...