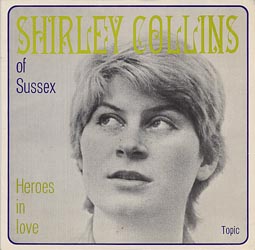 Brit-folk doyenne Shirley Collins revisists her 1971 No Roses album track by track and discusses how the songs were chosen – and the move away from folk tradition. Collins also talks about 10,000 Maniacs' cover of 'Just as the Tide was a-Flowing'; working with Maddy Prior and Fairport Convention; the Albion Country Band... and about the state of folk today.

Once again rebellious young rock 'n' rollers have turned exclusive Newport into a riot city of jazz and festival From LILLIAN ROXON, who visited Newport, U.S., ...

Shirley Collins: Shirley is a bit of a Good Fairy

THE YOUNG man fitted together what looked like a short walking stick with holes and showed it to folksinger Shirley Collins. "That's what we call ...

Shirley Collins: The Power Of The True Love Knot (Hannibal)

Shirley Collins: The Power Of The True Love Knot (Fledg'ling)

THE POWER OF THE TRUE LOVE KNOT is a marvellous collection and a landmark release in English folk. ...

FALSE TRUE LOVERS captures a vital contributor to the English folksong revival at a key stage in her development. ...

Retrospective and Interview by Mike Barnes, The Wire, May 2002

"The main body of [folk music] is just based on myth and the Bible and plague and famine and all kinds of things like that ...

A fearless explorer, a radical traditionalist, and one of England's greatest folk singers — but why hasn't she performed for 30 years? ...

IT'S HALLOWEEN weekend in Camden, north London, and ghosts are rising at Cecil Sharp House. ...

One of England's greatest folk singers has performed live for the first time in over three decades. To mark her return, here are some of ...

Shirley Collins: "When I sing I feel past generations standing behind me"

Retrospective and Interview by Jude Rogers, The Observer, 31 May 2015

Shirley Collins: With a guitar and a lipstick

The radical folk pioneer has cut a bold new album – her first for 38 years. ...

Shirley Collins: "There was no way I could ever sing to be popular"

Ahead of next week's Roundhouse concert, the voice of traditional English music reveals some unexpected musical likes and much more. ...