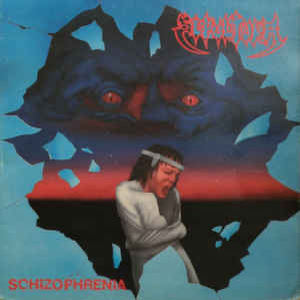 Sepultura: Blame It On Rio

From South America come Sepultura, monstrous speed metal gods for the future. Paul Elliott finds out about their ride from Rio. ...

THE PHONE rings at the ungodly hour of...noon...and it's the friendly publicist from Roadracer asking me if I'm still asleep. Not only am I still ...

With their new LP, Arise, Sepultura are poised to gatecrash the major metal league. And with their raucous mix of rage and rock the boys ...

Sepultura: Who Wants To Be A Brazilian Air Guitarist

With Nirvana and Metallica now deemed radio-friendly, someone had to supply a new soundtrack for rebellion — and Brazilian rockers SEPULTURA have taken up the ...

Collapsing stages in Japan! Elephant farts in Vegas! Eskimo shows in Alaska! A Survey of Abominable Venues and Disastrous Shows! ...

FAR BEYOND HEAVY! The mightiest Metal package tour of the year rumbles through California on World Cup Final day — will PANTERA be victorious, or can ...

Interview by Christine Natanael, crushermagazine.com, May 2004

WHEN IT COMES to the stuff that's loud and fast, well, I think you guys know I have to be right in the thick of ...