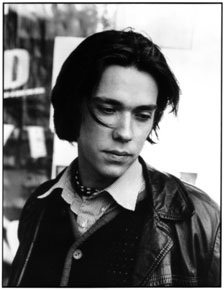 When Rufus Wainwright’s eponymous debut album appeared three years ago, it was as though the golden age of maverick American singer-songwriters had never ended. ...

The young poseur talks at length about his new album, Poses, and about its songs; about the effect of his musical education, his childhood and his occasional brush with homophobia.

Profile and Interview by Tom Cox, The Guardian, 7 August 1998

The son of Loudon Wainwright III, this melodramatic young folk singer might be the next Jeff Buckley. Tom Cox meets him ...

THE LAUGH is marginally less startling than his debut album, a cabaret of flamboyant songs about April fools, matinee idols and imaginary loves, as big-time ...

LOUDON WAINWRIGHT III, 53, was the folk-singing son of a famous Life magazine writer and came on the scene with several other "new Dylans" in ...

"A LOT OF SONGWRITING is revenge," Rufus Wainwright quipped, from his New York City hotel room. ...

THEY ARE THE sensitive boys of Canadian pop. Both are acclaimed singer-songwriters, and both are unabashedly emotional. One is gay, with an impeccable musical pedigree, ...

Profile and Interview by Barney Hoskyns, The Guardian, 15 June 2001

THE WITTIEST REQUEST from the crowd at Rufus Wainwright's New York show last week was for ‘Rufus is a Tit Man’, a song written aeons ...

BACK IN THE days of Stephen Foster, the piano was the centerpiece of the parlour. That was the room that women ran, the room where ...

AS RUFUS WAINWRIGHT is far too aware, the studied indolence that undercuts his artistry is also the essence of his appeal. ...

Rufus Wainwright Makes One Like They Used To Make 'Em

A young man following in the footsteps of Randy Newman and Van Dyke Parks records a masterpiece ...

LIKE MEMPHIS crooner Al Green before him, Rufus Wainwright is L.O.V.E. To see him in concert, as we did last week in Manhattan, is to ...

YOU’RE WALKING, you’re virtually running, exhilarated, exultant, across West 23rd Street, away from Chelsea where you’ve tripped the Apocalypse of Rufus Wainwright and at once ...

RBP: Is Want Two in any way the flipside to, or a contrast to, Want One? Or is it just a companion collection? ...

THERE IS AN anecdote that Rufus Wainwright enjoys telling about his childhood fascination with Judy Garland. "I wanted to be Dorothy – on good days," ...

FOR SOME of us, storming and misinformation almost derailed Rufus Wainwright's first Gotham appearance since his spring residency at the Gramercy Theatre. Yet it's a ...

Not many would have dared step into Judy's ruby slippers and revisit her most celebrated concert, but this man did. Jim Irvin prepares to weep ...

Wainwright or wrong? No rock in Rufus opera ...

FOR THE RECORD, THEN, OUR INTREPID DIVA: DOES HAVE HIS LEDERHOSEN CUSTOM-MADE, WAS TEMPORARILY SENT BLIND BY INJESTING TOO MANY DRUGS AND, OH YES, SINCE ...

Report and Interview by Phil Sutcliffe, MOJO, May 2010

"WE DON'T shy away from the fire, us McGarrigle-Wainwrights," Rufus Wainwright laughs. "We're made of stern stuff." ...

Rufus Wainwright: All Days Are Nights – Songs For Lulu

Review and Interview by Adam Sweeting, Uncut, May 2010

Just voice and piano. Not as simple as it sounds, says Adam Sweeting. ...

WHAT WAS ON Rufus Wainwright's mind while making his new album, the sparkly, pop-ish, Mark Ronson-produced Out Of The Game? Only this. ...