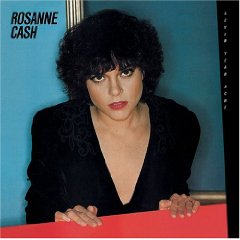 The not-so-native New Yorker on her current album The River and the Thread; on rediscovering the American South, and the Tallahatchie Bridge; on being Johnny Cash's daughter; working with her husband and co-writer John Leventhal; on songwriting, and her sewing circle!

Rosanne Cash Comes Into Her Own

COTATI – LONESOME steel guitar moans waver and echo throughout the Inn of the Beginning – a classic Old West watering hole 50 miles due ...

MOST OF the songs on Somewhere In The Stars, the third album by Rosanne Cash, are about the pitfalls of contemporary liaisons, the moments when ...

Rosanne Cash: Romance, rock and realism in the new Country

THE ENDURING appeal of country music has been its ability to describe the messy problems between men and women with accuracy and poignancy. For years, ...

Rosanne Cash: No Cash Down

ROSANNE CASH, a very young and dishy 30-year-old, has just celebrated the start of her second year without drugs. "Being on drugs is like being ...

Leaving the old wagon wheels behind ...

It's payola time for country's latest lone star Rosanne Cash. Richard Cook tries to separate the hit from the myth. ...

ROSANNE CASH wasn't kidding when she called this one Interiors. With the exception of 'This World' (which is about child abuse, among other things, and ...

"I'M NOT A militant female songwriter, and I wouldn't want to be considered some kind of new age uber-feminist," Rosanne Cash says. "But having said that, ...

YOU CAN'T EXPECT these things. So let me start in another place to explain. ...

ROSANNE CASH has already been to church by the time we meet for breakfast. As dawn broke on this wintry Parisian morning, the singer-songwriter slipped ...

IT'S TEMPTING TO BELIEVE that in a better world, Rosanne Cash would inspire as much love and reverence as her father Johnny, but since no ...

JOHNNY CASH lives with his daughter. He's in the set of her jaw, the power of her voice, and he stares down proudly from every ...

THERE COMES A time in every young man or woman's life when dad mounts the pulpit and delivers a homily on the kind of music ...

A HOST OF FACTORS, including brain surgery, have conspired to keep Rosanne Cash away from London for the last six years. Returning to a full ...

Rosanne Cash: The River & The Thread

LIKE A GOOD claret or damp moss, Rosanne Cash's singing is something to sink into. Surrender to the tones – mostly dark, but marked by ...

Rosanne Cash: The River and the Thread

ONE OF THE LAST songs Johnny Cash recorded was the moving 'September When It Comes' with his daughter Rosanne for her 2003 album Rules of ...