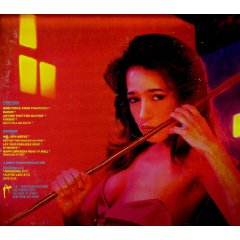 On marriage to, and escape from, Phil Spector; on being fancied by John Lennon, being a Ronette, being in Swinging London, being hit on by hero Frankie Lymon... and writing her autobiography.

Ronnie — the voice that brought Spector back

BACK in 1963, the Ronettes were three highly-coiffeured teenage girls who swept up the charts on a furious wave of Spector sound. Their lead singer, ...

THE SUCCESS of Motown's Supremes somewhat overshadowed most of the other girlie-groups in America back in the mid-sixties. But one trio who managed to hold ...

Ronnie Spector & The Ronettes at the Continental Baths

EVER SINCE Ronnie Spector and the Ronettes folded up shop in the late sixties, the music world has been awaiting their return. But despite one ...

Mmm-mm. Eighty-eight pounds of compact yumminess on parade for all you heavy guys out there. CLIFF WHITE, hot from New York, on delectable RONNIE SPECTOR's ...

PHIL SPECTOR......aah, the magic that name still evokes, but what of the former Mrs Phil Spector. Veronica Benett, better known as Ronnie Spector, this is ...

'I Wasn't Even a Housewife': Ronnie Spector's true confessions

SHE WAS supposed to be promoting her album, but Ronnie Spector’s first solo album isn’t the kind of thing that’s about to stop the world ...

Ronnie Spector: Be My Baby

Be My Baby: Ronnie Spector with Vince Waldron ...

THE SNOWBOUND metropolis of London holds many memories for Ronnie Spector. When she was riding high in the mid-'60s with The Ronettes, that vampy girl ...

YOU CAN BET it wasn't the first time Keith Richards has given up a night's sleep, but it may have been one of the more ...

"BRIAN WILSON wrote this song for me," Ronnie Spector said on Wednesday at her annual holiday party at Life, "but because of publishing and contracts ...

SHE WAS ONE of the voices of the American 60s, the purest element in Phil Spector's Wall Of Sound, the heartbeat of an entire generation's ...

Ronnie Spector: The Last of the Rock Stars

ONLY A FEW ARTISTS in history have been capable of defining an entire era in pop music. Ronnie Spector is one of those artists: the ...

RONNIE SPECTOR Greenfield strolls into the nondescript foyer of the Sheraton hotel in Danbury, Connecticut, a few paces behind her husband, Jonathan. ...

Ronnie Spector: Be My Baby?

When Phil Spector didn't have her under lock and key, she was being seduced by Lennon and getting wild with Bowie, Ronnie Spector, the ultimate ...