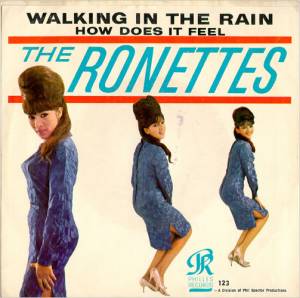 A two-week British tour is planned for end of January ...

The Ronettes hit and Phil's flips

BACK IN 1958 Estella & Ronnie Bennett bought a disc between them called 'To Know Him Is To Love Him'. So did their cousin Nadra ...

TALK ABOUT a coincidence! A thundering great coincidence — a flash of fate which virtually launched the swinging Ronettes, one of the most successful girlie ...

Phil Spector: Fifteen hits in a row — and if that's not genius, well what is?

Profile and Interview by Maureen Cleave, The Evening Standard, 25 January 1964

THERE WAS a time when Phil Spector would have been Beau Spector and the rage of Bath. His clothes alone would have made him famous. ...

ONE OF the mystery men of the U.S. recording scene is currently here in Britain following the interests of his artistes. His name is Phil ...

The Rolling Stones, Marty Wilde, The Ronettes: No Guitar But Will Travel

Ronnie — the voice that brought Spector back

BACK in 1963, the Ronettes were three highly-coiffeured teenage girls who swept up the charts on a furious wave of Spector sound. Their lead singer, ...

The Ronettes Return to the Stage: Teenage Girls Forever

FABIEN IS nervous. Not quite shaking in his boots, but enough so that his timing is off, lost in phrases that go nowhere despite the ...

Ronnie Spector: The Last of the Rock Stars

ONLY A FEW ARTISTS in history have been capable of defining an entire era in pop music. Ronnie Spector is one of those artists: the ...