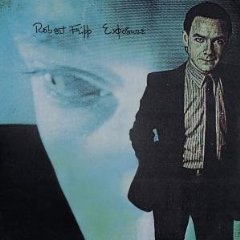 A Chat with Mr. Fripp

ROBERT FRIPP is a musician, theoretician, theologian and, as his colleague David Bowie (referred by Fripp as "Mr. B") points out, "probably the man with ...

The always interesting art-rocker on Frippertronics and the artist/audience dynamic; his work with other artists (Gabriel, Bowie, Daryl Hall); on production, his Exposure album... and disco!

ROBERT FRIPP doesn't give many interviews – which is silly because he's a shrewd, witty, and engrossing man who, when he's not sitting on a ...

Fripp and Eno: No Pussyfooting (HELP)

ROBERT FRIPP, lead guitarist with English rock King Crimson, conspicuous personality by appearing inconspicuous. Rather than stand when performing, he perches himself on a stool, ...

Robert Fripp: Something Is Stirring Down At Wimbourne

IT'S NOTHING to do with egos, you know, this final dissolving of King Crimson. No, there's something of a much grander design — somewhat rather ...

Robert Fripp: Why I Killed the King

King Crimson finally abdicated last week. But the end came with a whimper, an official statement merely commented that the band had "ceased to exist". ...

NEW YORK – After five short years, King Crimson is no more and the man who began and ended the group, Robert Fripp, is already ...

"IT'S NOT just an ordinary loop system. In fact, it's very complex. I invented it. Why don't you come and see me tomorrow and I'll ...

A LESSON IN priorities might have been as apt a title. For this, the first record bearing his own name, the idiosyncratic Mr. Fripp has ...

Interview by Kris Needs, ZigZag, May 1979

TO ME, ROBERT Fripp has always meant the nastiest riffs you could wish to cower from. I mean NASTY. Malevolent, grating sounds which fair oozed ...

The return to 'an intelligent way of living' ...

Robert Fripp: A Most Delightful Discourse With One Small, Mobile Intelligent Unit

THE USUAL ways to write about most rock artists are, I'm afraid, inadequate when one's subject is Robert Fripp. Generally, the writer's task is to ...

IT SEEMS peculiarly appropriate that, on my arrival at Polydor Records' West Coast offices on Sunset Boulevard, virtually everyone is engaged in a frantic search ...

Interview by Kris Needs, ZigZag, May 1980

A YEAR after Exposure and Robert Fripp is following through on his 80s drive with the combined Frippotronics-Discotronics and a bunch of new theories on ...

Robert Fripp: Do you want me to sell you an album…or a treatise on neg-entropy?

IN THE LOBBY OF THE LIZARD KINGS ...

WHEN IS A guitarist not a guitarist? What distinguishes pop music from avant-garde or classical? Why is most cerebral music purely instrumental? Can you dance ...

In The Court Of The Crimson King, Phase II ...

HE BEGAN, by his own admission, tone deaf and with "no sense of rhythm." He is a spit-shined, manicured man whose "best subjects at school ...

They seemed to belong to different worlds: the avant-garde guitar boffin and the marmalade-haired Princess of Punk. Listen awhile, as Mat Snow recounts the ...

Guitar hero meets cool synth dude on The First Day, a new album by Robert Fripp and David Sylvian. They should go together like a ...

Robert Fripp: "If you love music, become a plumber"

CRADLING A NICE cup of tea in the kitchen of his home on the River Avon in Worcestershire, Robert Fripp looks more like a kindly ...