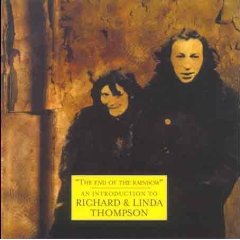 THE SINGULAR most remarkable aspect of this album is its manifestation of Richard Thompson's capacity to absorb. And if that sounds a long winded way ...

Profile and Interview by Dave Laing, Let It Rock, May 1974

ALTHOUGH the mid sixties was a golden era for British rock, very few of the best artists from that time have survived as significant parts ...

Richard and Linda put on the shine ...

RICHARD THOMPSON wrote 'Meet On The Ledge', in case you'd forgotten. On that basis alone the man would be due a certain portion of immortality. ...

Richard and Linda Thompson: Do You Wanna Be A Star?

IT WAS ONE of those large Edwardian houses in London's Hampstead, just off the main road. Like most of the others, it had been converted ...

IT WAS a night steeped in nostalgia. One of those occasions when the event was more important and ultimately more memorable than the music. Lots ...

I HAVE THIS adrenaline-fueled, hyper-hallucinatory recall of the first time I saw Richard Thompson away from club stages and makeshift podiums in Hyde Park. He ...

ROCK AND ROLL survives on an illusion of dynamism built upon critical inertia, upon endlessly repeated truths such as the oft-heard oppositions of 'old/new wave' ...

"IF I DON'T seem a part of the recording industry, it's probably because I don't feel a part of it," says Richard Thompson, the guitarist/songwriter/singer ...

THIS THOMPSONS package tour is a fine irony. Its visuals signal a break from the couple's traditional melancholy, replacing it with a sarcastic, partially threatening, ...

LOOSELY SPEAKING, Richard Thompson is the sole practising legatee of the British folk-rock tradition which he was instrumental in establishing 14 years ago as a ...

Richard and Linda Thompson: Let There Be Lights

RICHARD AND Linda Thompson opened their show at the Roxy Thursday night with 'A Man in Need', and followed it with 'Walking on a Wire', ...

No Bright Ones Tonight: Richard Thompson Shoots Out The Lights

THERE IS A story circulating about Richard Thompson. The way I heard it, the Eagles approached him, prior to hiring Joe Walsh: they wanted Thompson ...

RICHARD AND Linda Thompson, whose 10-year marriage and musical partnership ended in 1982, were a decidedly low-profile couple by rock standards. In fact, they were ...

Interview by Charles Bermant, The Globe and Mail, 6 April 1985

LINDA THOMPSON’S memories of touring the United States with her soon-to-be ex-husband Richard are filtered through an alcoholic haze and a skewed sense of delight. ...

Joe Boyd: "Our own little Motown"

Linda and Richard Thompson's marriage was fiery – so much so that Nick Hornby began a script about the legendary folk rockers. Here, on the ...

Richard and Linda Thompson: Keeping Up with the Thompsons

Once flippantly but affectionately called "the Sonny & Cher of the folk world", Richard & Linda Thompson are worshipped as living legends, a jewel in ...