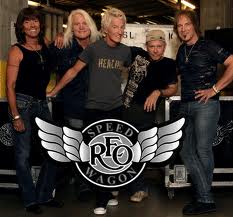 R.E.O. Speedwagon: The Band That Flies Together

WHAT REALLY GOES on after hours in Rock 'n' Roll Land? When a band is not touring or performing what do they do to take ...

REO Speedwagon Makes Its Own Way

REO Speedwagon: After The Ninth Album You Don't Throw The TV Set Out Of The Window

THE INEVITABLE PROCESS OF MATURITY AS EXPERIENCED BY REO SPEEDWAGON. SANDY ROBERTSON WRITES ...

FROM OUT OF THE STEREOS OF BABES ...

THESE ARE THE MEN OF BONANZA ...

More Than a Feeling: The 20 Greatest AOR Tracks of All Time!

Author's Note: I have found that most discussions of AOR get easily sidetracked unless it's made clear which definition of the AOR acronym we're using. ...