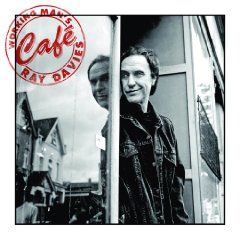 THERE is something of the smoking volcano about Ray Davies. Six foot of suppressed quietly spoken, quietly smiling and quietly watching! It is what some ...

The King Kink on getting shot in New Orleans, his relationship with brother Dave, his childhood and upbringing, and on songwriting and lyrics, plus so much more.

KINK RAY DAVIES is a well respected man when it comes to composing, and dozens of his compositions are justly regarded as classics. There really ...

THE TROUBLE with Ray Davies is that since he forsook the stark, three-chord spleen of 'You Really Got Me' and 'All Day & All Of ...

MINNEAPOLIS: "It's like death in here," Ray Davies says, inauspiciously welcoming me into Marquette Inn room 1453. The shades are drawn, no lights are on. ...

Ray Davies: Sadness and A Kind Of Fame

RAY DAVIES has always been a rough diamond. The famous gap-toothed smile is still there, he mumbles through his polysyllables and, bit by bit, he ...

Ray Davies Gets the Kinks Out Musically

Interview by Charles Bermant, The Globe and Mail, 6 December 1986

BY VIRTUE OF its title, The Kinks' new Think Visual album should have a more elaborate cover. Instead it is only an exaggerated supergraphic, with ...

It's an exacting, exhilarating discipline: everything you want to say condensed into 180 seconds. "It's the ultimate song structure and I hope it'll never die." ...

Kinks: The Singles Collection/Waterloo Sunset — The Songs Of Ray Davies

It's a shame about Ray: Classic chartbreakers and their creator's solo furrow ...

How do you feel about this so-called line of classic quintessentially English songwriters starting with you, continuing with Paul Weller and ending with Damon Albarn? ...

IT HAS BEEN less than a week since the terrorist attacks, and Ray Davies just doesn't have his mind on music. ...

"It's been a very difficult year for everybody," Ray Davies admits, the nearest he gets to acknowledging his being shot in the leg by muggers ...

Ray Davies: Return To Waterloo/Come Dancing With The Kinks

YOU KNOW WHAT Van Morrison, David Gilmour, Ray Davies and Donald Fagen have in common, besides their royal rank in rock geezerdom? They have new ...

"MY SONGWRITING has been my ally through life," Ray Davies muses, "because I ain't got much else." As the creative force behind the Kinks, Davies ...

Profile and Interview by Jon Savage, The Observer, 28 November 2010

IN LATE 1965, Ray Davies threw a party. One of his guests was a clothes designer, and as Davies recalled: "I got pissed off with ...

WELL RESPECTED certainly but hardly a flower to be looked at and most unlikely to laze around in the afternoon, sunny or otherwise. The life ...