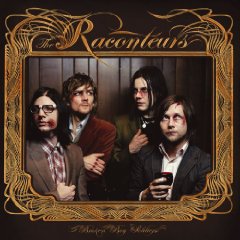 Raconteurs Jack White, Brendan Benson, Patrick Keeler and Jack Lawrence on how they got together, making the first album, and their shared love of Led Zeppelin

Jack White's Side Dish: The Raconteurs

THE BUSMAN'S holiday has a long if mixed history in rock. From makeshift supergroups to one-off time-killers to impromptu jam sessions, sideline moonlightings are part ...

Interview by Jenny Valentish, Inpress, May 2006

WE'RE AT ONE of those post-modern hotels you could only find in the most pretentious corner of London, with perplexing paintings and an oval lounge ...

The Raconteurs: Gang Of Four

Profile and Interview by Keith Cameron, MOJO, May 2006

THE BRICKS stuck around to cheer on their pals in the Greenhornes, a Cincinnati garage-rock trio that played so often in Detroit they seemed like ...

The Raconteurs and the making of 'Steady, as She Goes'

IF EVER A record begged to be released on 7" vinyl it was the Raconteurs' 'Steady, as She Goes'. Redolent of an era when people ...

The new Raconteurs album is to be released without pre-publicity. Is this a gesture of fairness to the fans, or an attempt to silence the ...

Brendan Benson: Your Old, Unfamiliar Friend – Or So He Wishes

Since the success of his acclaimed band The Raconteurs, Brendan Benson has earned plenty of public recognition – but he'd rather have his anonymity back, ...

"There's a Voice in Me Saying Slow Down": Jack White Looks Back

WE'RE COMING to the end of a punishingly intense set by the Dead Weather, the second side-project band formed by Jack White of the White ...

ON THE 18TH of August 2009, in Salt Lake City, I was privileged enough to sit down with Jack White – variously a White Stripe, ...