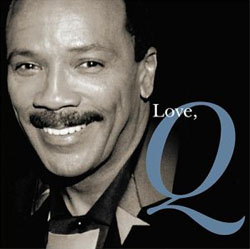 The man known as "Q" talks, between mouthfuls, about meeting Stravinsky; trying to put Michael Jackson together with Prince; the people he has known, from Dinah Washington to Colin Powell via Miles Davis and many others; and on the state of black America.

Lesley Gore is Set For Stardom

WHO IS the young pop artist most like to hit the highest spots this year? ...

Music In The Making: Quincy Jones — Sarah Makes It All Worth While

Quincy Jones, who spent last week in London enjoying the sights and sounds by day and night, is one of music's all-rounders. Bandleader, composer, arranger, publisher, ...

Quincy Jones: One Of The Greatest!

SITTING IN a deserted recording studio at Philips, listening to the playback of a just-completed session by the Johnny Dankworth Orchestra, Quincy Jones – trumpeter, ...

Brothers Johnson: Good To Ya, Good For Ya

ONE OF the success stories of 1976 in terms of 'newcomers' on the scene is concerned must involve George & Louis Johnson. Although they'd worked ...

Quincy Jones finds that the ideas and his music are just flowing these days, he feels like a man on the sea, just going with ...

The Superstar: Much More Than The Just The music

IT MAY be one of the most frequently misused of the music industry's accolades, since in a business full of stars there are few genuine ...

Frank Sinatra with Quincy Jones and Orchestra: L.A. Is My Lady (Quest)

The Jackson and Jones alliance has seen the transformation of a bubble-gum singer into the greatest musical phenomenon of his era. ...

Quincy Jones: Back On The Block

ON THE FACE of it, this is where the man who was called 'Q' even before this magazine generously allows his address book to make ...

Profile and Interview by Mark Cooper, The Guardian, 8 February 1990

From Satchmo to Wacko Jacko, Quincy Jones has worked with them all. Now, he tells Mark Cooper, it's time to take stock. ...

QUINCY JONES, producer of everyone from Frank Sinatra to Michael Jackson, is now mixing jazz and hip-hop and working with Jesse Jackson and New Order. ...

THE THREE DUMBEST questions you could possibly ask this month are, "Do the ambulance workers deserve more pay?", "Is Mike Gatting a pillock?" and "Does ...

WHAT AN extraordinary life the multi-talented Mr Jones has led. He's worked with everyone from Count Basie to Melle Mel, Frank Sinatra to Michael Jackson ...

THE MUSICAL legacy of 74-year-old Quincy Delight Jones Jr. looms large over the landscape of popular culture. While our grandparents might remember him as the ...