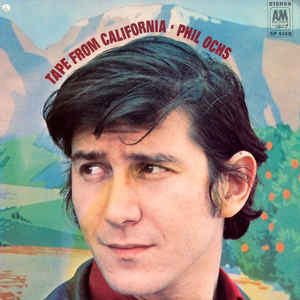 Beaulieu — a real triumph thanks to the downpour ...

LAST TIME American singer/songwriter Phil Ochs was here he stormed around from gig to gig, ending up in a four-letter-worded altercation with a St Pancras ...

Loraine Alterman on Pop Records: The Shattering Impact of the Doors

THE DOORS, with Jim Morrison singing lead in his urgent, compelling voice, lead you into the strange world of their music after the freaky album ...

AFTER BATHING AT BAXTERS (RCA) Jefferson Airplane. 'Ballad of You Me and Poohneil', 'The War is Over', 'Saturday Afternoon', plus nine other tracks. ...

The Extraordinary Mind Of Phil Ochs

The War Isn't Over for Phil Ochs Yet

WHEN PHIL OCHS arrived in England on his recent visit the immigration people almost didn't let him in. "They asked me did I want to ...

Real Phil Ochs Back, But There's a Penalty ...

Profile and Interview by Tom Nolan, Rolling Stone, 27 May 1971

Who was that foolThrew the basket in the pool? ...

ALTHOUGH I'M typing this in Greenwich Village, New York City, this story really begins 3,000 miles away in Los Angeles. ...

FOR A LONG PERIOD of time in Greenwich Village, Phil Ochs served as a sort of town crier. Each month at the Sunday Songwriters Workshop ...

PHIL OCHS, who committed suicide in Los Angeles on April 9, was among the most sardonic and militant of the Greenwich Village folksingers of the ...

AROUND 1980, my friend Julia invited me over to listen to a compilation album by a singer named Phil Ochs. I was a college senior, ...

Phil Ochs: Bringing It All Back Home

"WHILE THE Movement died a natural death, the music died by hanging," Esquire's headline said when the protest singer Phil Ochs committed suicide in 1976. ...

There But for Phil

BACK IN AUGUST 1973, Melody Maker sent me to Los Angeles to become their US correspondent, the third in line after Roy Hollingworth and Michael ...