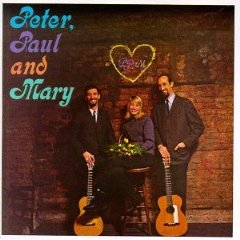 The folksome trio talk about the "ownership" of the folk cannon; their unique vocal blend; Bob Dylan and 'Blowin' In The Wind'; the Folk Family, and their songwriting.

Protest Songs: How sick will they get? asks Alan Smith

SING A SONG of protest — and you, too, could find yourself there in the charts. Suddenly a whole flood of these let's-put-the-world-right numbers has ...

Garden Thronged for Songfest In Aid of Vietnam Moratorium ...

Mary (of Peter, Paul and Mary) is doing a McCartney

PETER, PAUL AND MARY were the most successful vocal group of the American folk revival of the 1960s. In particular, they were responsible for bringing ...