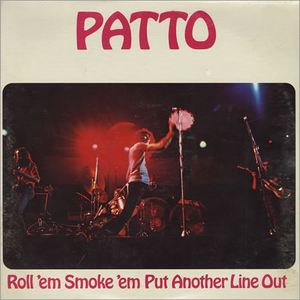 PATTO ARE better than most rock bands for two reasons – they play without any sense of snobbery (no boring ego jams), and secondly because ...

I FIRST met Mike Patto four months ago. With his agent he walked into the MM office, a gangling figure in high green leather boots ...

MIKE PATTO and his friends like to be known as the last of the raving bands – and they may well be right. Meeting them ...

NOW YOU'D EXPECT Mike Patto to be sardonic, and embittered after five years in various guises and never really making it. ...

ALTHOUGH Patto has exhibited a penchant for eccentricity in their previous efforts, not even from a bunch of loonies such as they could one expect ...

PATTO'S THIRD ALBUM is something different. Not different than their last release, Hold Your Fire, which is fairly similar stylistically, but very distinctive indeed in ...

PATTO MAY not be the richest and most famous band ever to step out of their rock 'n' roll shoes, but in my book they ...

BEFORE THEY split up in 1972, Patto had the reputation of being a "Musicians' band". Which made them feel good but didn't pay for life's ...

IT WAS, as they say, a night to remember. The queue outside London's Torrington last Sunday stretched right down the road, and dozens were left ...

Mike Patto, Ollie Halsall, and Keith Ellis describe the paths that led them into the ring

AFTER DISCOVERING the group Patto on late-night FM radio several years ago, it was depressing to learn a few months later that the group had ...