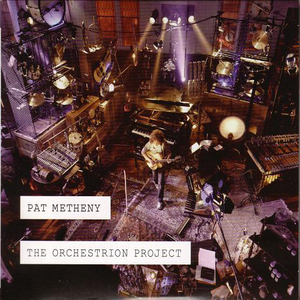 Ensconsed in his Brooklyn rehearsal space, the master guitarist demonstrates his 19th Century-meets-21st Century one-man-band Orchestrion, along the way discussing issues such as performing for children, soundproofing his apartment, and the difficulties in negotiating Canadian border posts.

Live Review by Philip Elwood, The San Francisco Examiner, 20 May 1977

A singer with everything ...

THE CONTROVERSY thus far: Pretty is the word you want to use when you talk about Pat Metheny — from his guitar styling to his ...

NEW YORK CITY — In his salad days as a (barely) postadolescent college instructor, Pat Metheny should have been teaching Healthy Attitudes 101 in addition ...

A Master of Improv Stresses the Importance of Narrative ...

THE GUITAR is arguably the most eclectic and democratic of instruments. Some form of it appears in nearly every society. Anyone can learn to play ...

WHEN JAZZ PIANIST Herbie Hancock recently won the Grammy Award for album of the year for a set of reimagined Joni Mitchell songs, musicians and ...

Profile and Interview by Richard Williams, The Guardian, 17 July 2010

Admired by Radiohead, friend of Godard, Manfred Eicher is the founder of ECM, one of the most successful jazz labels in the world. He tells ...

Obsessed drum'n'bass muscle writes daily letters to jazz wizard (and to Beethoven and Elgar). Eventually he posts one. Word arranges a summit ...