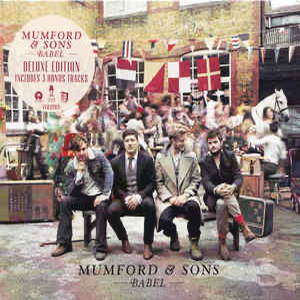 SEVEN O'CLOCK in Kentish Town and it appears The Forum has been invaded by a flashmob of glamorous fortune tellers. At the bar, there are ...

The Almighty Power of Mumford & Sons

Profile and Interview by Laura Barton, The Guardian, 11 February 2010

IT'S HARD TO imagine a more preposterous road to platinum success than the one Mumford & Sons travelled. Sigh No More, the 2010 debut by ...

Nothing towers in Mumford's Babel ...

"CAUSE I KNOW my weakness, know my voice," sings Marcus Mumford on the title track of Babel, the spectacularly successful U.K. folk-rockers' second album. "And ...

Having disappointed by going electric on their third album, the Mumfords issued a powerful reminder of their folk-hero status ...

Mumford & Sons are 21st-century boys these days, with new album Delta continuing their self-conscious plunge into progress... but are they playing against their strengths? ...