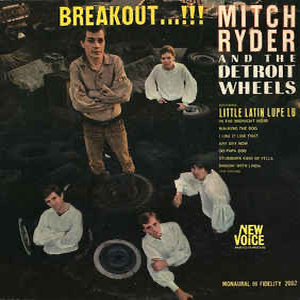 Mitch Ryder & the Detroit Wheels: A Rocket on the Road to Fame: Mitch and His Four Wheels

THE MONSTER eight-door white Pontiac, looking more like an ambulance than a limousine for stars, stopped in places like Arnold's Park, Iowa; Freemont, Neb.; Sioux ...

Mitch Ryder & The Detroit Wheels: The Soul Of Ryder

MANY TRY but few white entertainers really succeed in singing the blues as they should be sung. The blues which come from deep inside seem ...

WATCH OUT, world, here comes the brand new Mitch Ryder Show. Mitch Ryder and the Detroit Wheels are no more. Instead Mitch will be socking ...

On the Pop Scene in Detroit: Brenda Lee

BRENDA LEE, who at age 22 has been in show business for a dozen years, is in town at the Roostertail where there'll be a ...

Britain's Lulu Looks at America and the Hemlines

This interview was found in the vaults by Harold Colson, an ace Librarian at the University of California at San Diego.Harold is researching the Stones’ ...

DETROIT, FOUNDED in 1736 by a turncoat (to both sides) halfbreed Indian named Quazimodo from the Kuitee tribe which dwelled circa 1670-1777 on the shores ...

Mitch Ryder At The Whisky

AT HIS FAMOUS ROXY GIG of three-and-a-half years ago, Bruce Springsteen prefaced a superb encore of Mitch Ryder and the Detroit Wheels' greatest hits by ...

Mitch Ryder: From The Detroit To The Top Ten

Retrospective by Fred Dellar, The History of Rock, 1983

Mitch Ryder meant guts, sweat, bump 'n' grind. His skin was white but he sounded black. He came from Detroit and he should have worked ...

With a new Don Was-produced album finally in stores, the Detroit-rock icon sets sights anew on his American audience. ...